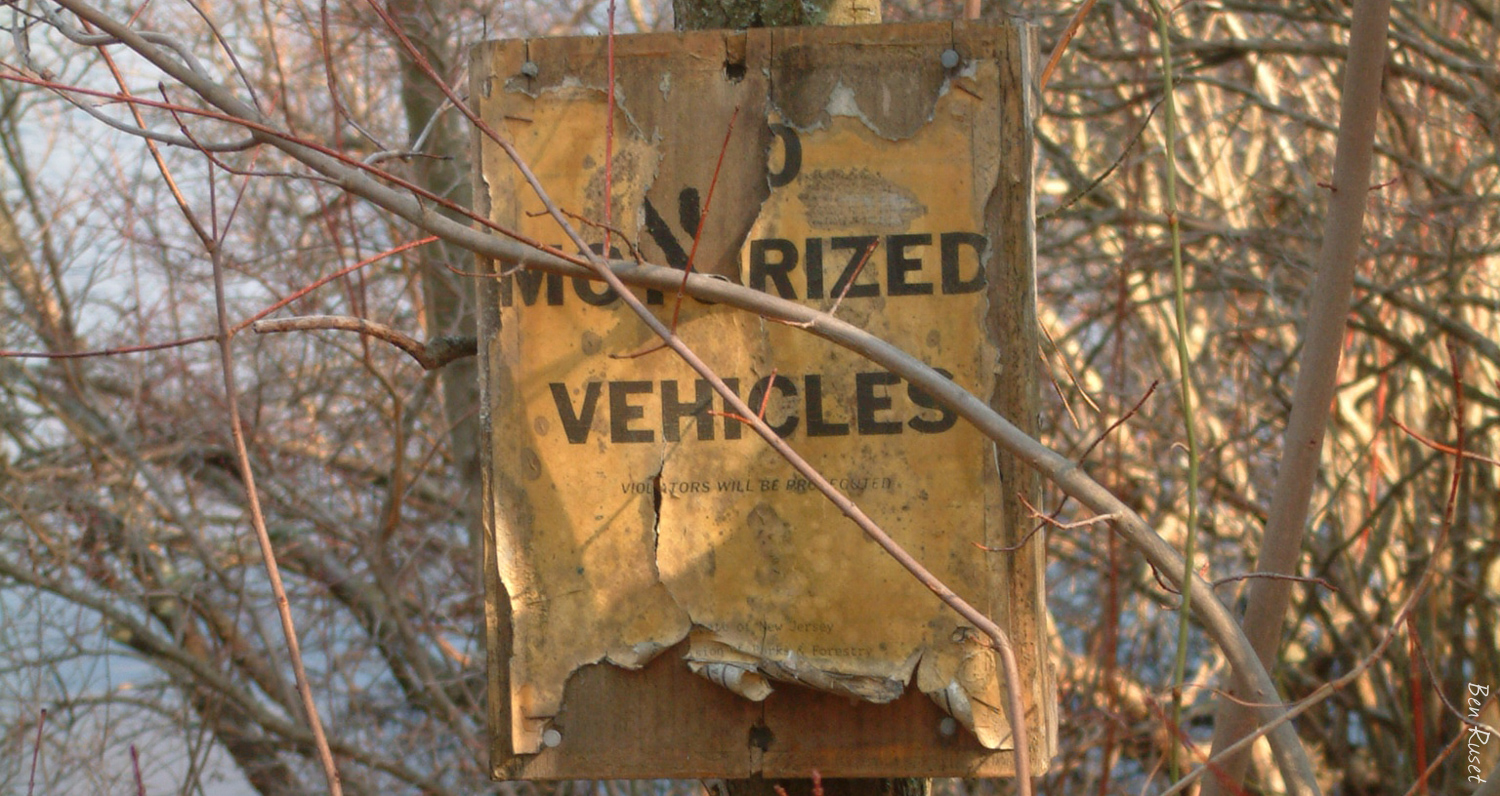 This morning the Pinelands Preservation Alliance released an email blast urging people to support the Wharton State Forest Motorized Access Plan. Rather than coming up with ways to balance environmental protection and public access to the forest, the PPA continues with their tired routine of inflammatory rhetoric, misleading statements, and utter contempt for those against the MAP.

For a long time, I’d been an ardent supporter of the PPA’s efforts at protecting the pinelands. They fought hard against the BL English pipeline, a project that I still oppose and feel is a far greater threat to the Pinelands than motorized vehicles. They’ve released some excellent video podcasts showing the history of the ghost town of Harrisville and the story of the Atsion mansion. They work tirelessly to keep the Pinelands Commission accountable to the mandate of the Pinelands Comprehensive Management Plan. Today, though, all of this is changing.

Here are some of the untruths they, and some of their hard-liner supporters, are spreading.

Fallacy #1: They have claimed that the only people opposing the MAP are off-road-vehicle enthusiasts.

Reality: The people speaking out against the MAP all come from varied backgrounds and represent a wide range of interests. One of the founders of OpenTrailsNJ, a coalition promoting fair access to the forest for everybody, is a card carrying member of the PPA. The town councils of seven Pinelands towns have all passed resolutions agreeing that the MAP was ill-conceived. I myself am a photographer, amateur historian, and have run this website for over twelve years. I’ve spoken to several well-respected environmentalists who feel just as strongly as I do that the way that the MAP is not a workable idea. Sportsmen are particularly affected as most of their hunting spots can only be accessed using the network of smaller roads and trails that would be closed under the MAP. Kayakers looking to paddle the smaller tributaries of the Mullica and Batsto are out of luck as now the only “easy” access to the water are at the crowded official state launching sites. These are just a few of the types of people who do not support the MAP as it was originally intended.

Drumming up support is much easier when you speak in hyperbole and try to vilify your opponents. In this case, the PPA’s statements are not backed up by fact.

Fallacy #2: The damage at Wharton State Forest has hindered fire suppression efforts and search and rescue due to impassable roadways.

Reality: The claim that fire suppression efforts have been hampered is without merit. It’s been claimed that some fire equipment has gotten stuck while responding to fires. There’s so many variables involved that could lead to a vehicle getting stuck. What was the condition of the tires on the vehicle? Was the driver paying attention? Was the road adequately maintained? Was it undermined by flooding?

Their claims break down under scrutiny. During the implementation of the MAP crews under the direction of Wharton Superintendent Rob Auermuller blocked off a number of roads with dead fallen trees in an effort to prevent motorized traffic. But wouldn’t that also block first responders as well, causing delays as crews would have to work to move the numerous heavy trees from the roadway? Or how about the fact that both the fire chief and the EMTs in Green Bank stood up and argued that they had not been consulted about by the state at all? How can the PPA claim that the MAP will benefit first responders and increase access to the forest when they weren’t even consulted?

No, it’s more compelling and inflammatory to blame everything on “reckless” ORV drivers, and have your employees show up at town hall meetings waving signs that say “Protect Fire Fighters’ Lives!” Fortunately most people see the ridiculousness for what it was – a desperate attempt to try to sway support to their side. Maybe the next sign will say “Support the MAP! Think of the Children!”

Fallacy #3: Enforcement of illegal off-roading activities has been difficult without a map clearly designating areas for motorized vehicle use and areas where motorized vehicles are prohibited.  The damage will not stop until we have a Motorized Access Plan (MAP).

Reality: The state has, for decades, marked certain areas as being closed to motorized vehicles. Unfortunately, a small number of people have ignored those signs and continued to damage those areas. The damage is not happening because people are unsure where they can drive – those areas have been clearly marked off as being off-limits. The dirty little secret is that the state and the PPA both know when, how, and where the damage is occurring. The PPA even has an interactive map on their website showing where the damage happens. The damage is happening because of the state’s lackadaisical approach to backing up their closures with law enforcement patrols.

One Sunday afternoon in 1986 eighteen conservation officers issued 112 summonses for illegal activity in Greenwood Wildlife Management Area, an area that is one hundred thousand acres smaller than Wharton State Forest. Today it’s unusual for there to be more than two officers out on patrol out in Wharton at any given time. Those patrols are usually centered around camp sites where it’s easier for an officer to issue a summons for someone cracking open a beer than bust someone causing ecological damage. But this is through no fault of the Park Police! Over the years, funding has siphoned away by Trenton, leaving the State Park Police under staffed and under funded, and unable to properly patrol the forest.

Yet the MAP makes no provision for enforcing these closures. There’s no funding increase for the park police. The PPA is simply advocating for a new look to a decades-long failed policy of forest management and hoping for the best. That’s the kind of attitude that will lead to Wharton being closed off entirely as the forest continues to be damaged.

Fallacy #4: The state released a plan to protect the forest by placing some roads off-limits to motorized vehicles in August while leaving 225 miles open for vehicles.

Unfortunately, due to opposition from some motorized recreationists, the final plan will not be released until after a series of stakeholder meetings in October and a public meeting on November 5th.

In a disappointing move, the Department of Environmental Protection removed the draft MAP from their website in September.

Reality: The state removed the draft MAP plan from the website because they did not expect the outcry that erupted when 58% of the road and trail network was closed off without public notice. It took seven towns to come up with resolutions against the MAP before they begrudgingly realized that maybe they should consider what the public has to say.

The stakeholder meetings will allow representatives of various interest groups to meet with the DEP and, hopefully, come up with a new plan that will balance environmental protection with fair access to the forest. Every reasonable person realizes that there are areas of the forest that need to be closed off and given time to recover. One of the main problems of the MAP, besides the veil of secrecy that surrounds it, has been the state’s rationale behind closing off vast portions of the forest that neither are damaged or in danger of being damaged.

A closer look into the language that the PPA is using is disturbing. “Unfortunately, due to opposition from some motorized recreationists, the final plan will not be released until after a series of stakeholder meetings in October and a public meeting on November 5th.” To me that sounds like the PPA is disappointed that the public will get a chance to have a voice in the revised MAP. They’re not interested in coming up with a MAP that is fair to everybody. When did the PPA become the sole arbiter of how the forest should be accessed? Wharton State Forest was purchased with public funds to provide recreational space for the residents of New Jersey, not to become the PPA’s private walled garden.

Fallacy #5: The opposition to the MAP have tried to make this a public access issue. This is not about stopping people from visiting the state forests. In fact people won’t be able to spend time in Wharton if this destruction continues.

Reality: How is this not a public access issue? Even the PPA realizes that the public will be excluded in this statement on their website (one third of the way down): “Some people are justly worried that the people doing harm will ignore the rules and continue to use the informal sand roads, while law-abiding citizens will be the only ones excluded from driving on roads they have used for many years.”

The PPA claims that there are 274 miles of road left open and that this should “be enough.” Given the amount of outcry from the public and the sweeping impact that this change will have on people, it clearly is not. The roads left open are wide and heavily trafficked. Anybody looking to explore “off the beaten path” or find solitude in the pines, much like people have been doing for hundreds of years, is going to be sorely disappointed. The PPA claims that no spot in the woods is more than one mile from an open road yet they neglect to take into account the ease of getting lost while bushwhacking a mile through a swamp, the pain of the pushing through stands of choking briars that rip at your extremities, exposure to disease carrying insects, nor the the danger of dehydration during the sweltering New Jersey summer. They don’t take into consider the person who now has to drag a hundred-pound kayak that mile to get to the launching spot that they once were able to responsibly drive to. They forget the hunters who would have to shoulder two-hundred pound bucks back to their truck. These are kinds of people that, for decades, have driven responsibly down the roads that the PPA now advocates closing.

It’s no lie that irresponsible ORV drivers have caused damage to Wharton and that some areas need to be closed and allowed to recover. Through the stakeholder meetings the PPA has a chance to enter into a positive, constructive dialog with people who might not necessarily share their point of view, but are willing to work together to find a compromise that everyone can live with.

I once felt that the PPA was a overall force for good. It’s a terrible shame that the PPA is so unwilling to be part of a reasonable solution and continuing to advocate for a policy that steamrolls the rights of the public out of the way. Through inflammatory rhetoric, half truths, misleading signs their supporters have brought to town council meetings, and the obnoxious social media posts by some of their employees, the PPA has done more to hurt their public own image than any anti-MAP person could have done.

It kills me to have to write this, but today I am ashamed to say that I ever supported these people.