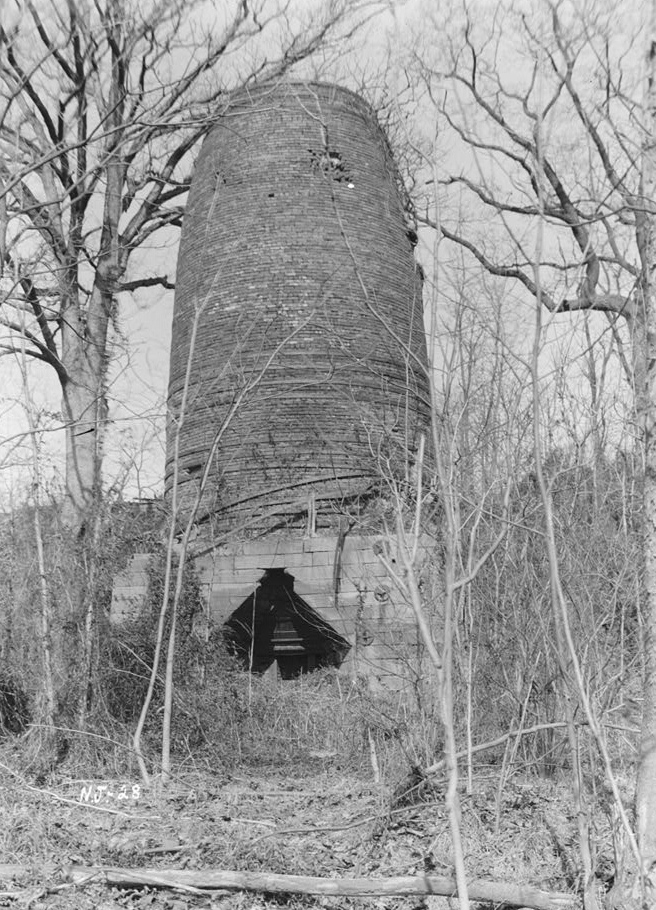 The production of iron is perhaps the most famous of the Pine Barrens industries. Fortunes were made and lost nearly overnight, and entire towns and communities would grow, thrive, and ultimately die based on the success of the enterprise. From the late 1700’s to the mid 1850’s, the furnaces and forges of the Pine Barrens produced a significant amount of goods, most destined for markets in Philadelphia and New York City.

The earliest known “blast” style furnace – as all of the Pine Barrens furnaces were – were constructed in China during the Han Dynasty, around 100BC. This design spread throughout much of the ancient world, but with the coming of the Dark Ages (circa 476-1000 AD) the use of iron furnaces in Europe had largely petered out. The use of the blast furnace was revived in Europe from circa 1100 onwards, with much of these furnaces located in Northern Europe. Early settlers to America brought this technology with them, and finding plentiful forests and ore beds, set the task of building the iron industry in North America. The first iron furnace in New Jersey was established in Tinton Falls, Monmouth County, sometime before 1684. For the most part, the basic technology used in this early furnace is the same as what is used today.

The blast furnace consisted of a square stack, roughly twenty feet in height, and between twelve and thirty feet in width at the base, tapering in as the height increased, to form a sawed off pyramid shape. The bottom of the stack usually tapered inwards to the hearth where there was an inlet for air called the “tuyere” and arches set in the furnace masonry with separate draws for impurities and for the molten iron.

Bog Iron, or limonite ore is notorious for a high impurity rate. The downside to the Pine Barrens furnaces that used this ore versus the North Jersey forges that primarily used Magnetite or Red Hematite ore was the large amount of slag that was produced and a lower quality of finished product. The quality of the bog iron ore was primarily based on how the ore developed locally, and would vary from ore bed to ore bed. Some furnaces, such as Bergen Iron Works in Lakewood and the Batsto Works, increased the quality of their iron by mixing the local bog ore with iron imported from Europe.

The process of putting a furnace in blast was a lengthy one. First, a fire fueled with charcoal was started in the hearth until the furnace stack was heated sufficiently. Then a small charge was loaded in the furnace. The charge consisted of bog iron ore, charcoal, and oyster and clam shells for flux. Then, air was blasted into the furnace through the tuyere by way of large tub bellows powered by a water wheel. This would raise the temperature near the hearth to a blistering two thousand degrees Fahrenheit. When the furnace had reached the proper operating temperature, larger charges would be dumped into the furnace until it was nearly full.

The iron ore would melt due to the reaction with superheated carbon monoxide gas. This molten iron would trickle down towards the hearth, picking up carbon as it passed through the layers of charcoal. This iron collected in the crucible at the base of the furnace, while the calcium silicate impurities known as slag floated on top of the molten iron. The process of removing the iron, known as tapping, was done every twelve hours. During this time the slag was also removed and discarded.

Directly in front of the furnace was a wooden building called the casting house. Channels, known as sows, were dug in molding sand from the arches at the base of the furnace and fed into oblong troughs called “pigs” or directed to shaped cavities dug in the sand to make pots and firebacks. The casting house provided the rapidly cooling iron protection from the elements which if left out in the rain or snow, would adversely impact the quality of the iron. Pig iron was notoriously brittle and still high in impurities. For the most part, the furnaces did not work the iron any farther, although some operations had smaller cupola furnaces that resmelted broken cast iron objects as well as pig iron. They aided in the production of hollowware, firebacks, and pipes.

There were two different varieties of blast furnaces. Older furnaces used the “cold blast” method, in which the air that was blasted into the furnace was the same ambient temperature as the air around the outside of the furnace. In 1828 a Scotsman by the name of James Beaumont Neilson patented his “hot blast” method, in which pre-heated air was blasted into the furnace. The escaping gases of the furnace itself were used to heat the air blast. This significantly reduced the amount of fuel required to run the furnace by as much as forty percent.

In North Jersey, most blast furnaces were built at the side of hills to make it easier to add new charges. The Pine Barrens, with its mostly flat topography, made it necessary to build shorter furnace stacks, and construct long wooden ramps to allow the charge to be dumped in at the top of the stack. More elaborate furnaces, such as the forge at Howell Iron Works, actually had a special opening near the top of the stack where workers would dump their wheelbarrows directly into the furnace. Since the temperature at the top of the stack was about six hundred degrees Fahrenheit, this allowed the worker to load the charge without subjecting him to the hot winds, smoke, and burning cinders flying out of the top of the stack.

Generally, the furnaces were in blast up until the time that ice began to freeze up the raceways that fed water to the water wheel. Due to the arduous process of putting the furnace in blast, the production of iron continued around the clock, seven days a week. If a furnace went out of blast, it was a noteworthy event, and cost the owners considerable money. When the ice finally stopped the water wheel from turning, the fires were blown out quickly, and the furnace was not put back into blast until the last of the ice had melted in the spring. While the furnace was out of blast, the stack would be relined and new hearths installed.

Many furnace owners also owned forges which were much smaller operations than the furnaces. Oftentimes one furnace would feed several forges, and small forges would often source pig iron from whatever furnace had it for sale. Map makers, for the most part, often ignored the distinction between a “forge” and a “furnace,” randomly naming forges furnaces and furnaces forges. Confusion as to whether a site was a forge or a furnace continues to this day, although the careful observer will see a distinct difference in furnace and forge slag.

A bloomery forge had several smaller furnaces where pig iron would be reheated and a hammer weighing up to six hundred pounds at the end of a long wooden beam. Cams were attached between the water wheel and this beam, allowing for an up and down tilting movement as the water wheel spun. This hammer was known as the forge or tilt hammer. This hammer would fall upon an anvil on which the semi molten iron would be placed. The iron then be reheated in a second forge known as a “chafery” and would be again pounded by the tilt hammer, or in a forge known as a “finery” and worked by a water powered hammer known as a helve. This time, though, the iron would be worked into bar shape, and the finished product would be known as “bar iron.” The bar iron would be further worked into useful products in the countless blacksmith shops that peppered the landscape up until the early twentieth century, or in slitting mills or screw mills that produced nails and screws.

The decline of the iron industry in the Pine Barrens can be attributed to three things. Firstly, new sources of iron ore were found in Pennsylvania in the mid 1800s, giving the Pennsylvania furnaces a competitive edge over the Jersey furnaces. This iron was easier to mine than bog iron ore and was vastly superior in quality. Secondly, the bog iron beds were mostly depleted, and did not reform new ore as quickly as it was originally thought. Furnaces needed to import ore from other sources, driving up the prices of the finished product. Finally, the Panic of 1873, which devastated the economy of the United States, provided the final nail in the coffin for the already depressed Jersey forges. One by one the furnaces went out of blast, never to be lit again. Over the years, furnace stacks were torn down for bricks, forge hammers sold for scrap. Those who chose to stay on and live in what was left of the isolated furnace towns found life hard and work scarce.

Today none of the furnace stacks in the Pine Barrens still stand. Only piles of slag and a few scattered bricks remains where most furnaces once proudly stood.

Special thanks to Budd Wilson, Paul Schopp, and Neil Hitch of the Ohio Historical Society for their advice, input, and corrections to this article.