The area known as Rockwood lies on the east side of Route 206 in Hammonton just north of the Paradise Lake Campgrounds, down the long straight road officially known as Rockwood Road. Just like the Paradise Lake property, Joseph Wharton owned much of Rockwood in the 1880s. In fact Paradise Lake and Rockwood once were part of the larger West Mills tract. Wharton separated the two parcels when he sold most of the property that would become known as Rockwood. J.G.Wilson, historian and long time editor of the Hammonton News, writes about this sale in the Fall and Winter, 1981 edition of The Batsto Citizens Gazette, but unfortunately he incorrectly identified the man named Rockwood in his research. He names a George Rockwood of Newark as the purchaser of this property from Wharton. 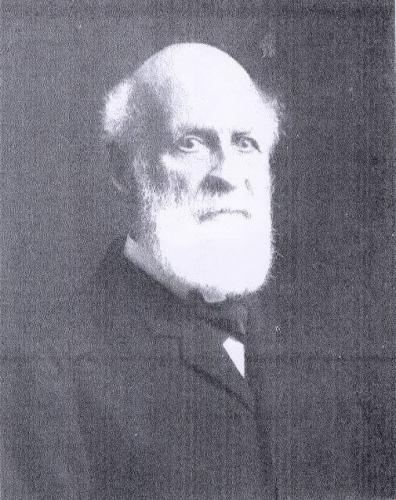 enry Charlton Beck traveled through the Rockwood area many years before Mr. Wilson wrote the article, and even at that early date the workers at the bogs did not know about Rockwood when Beck asked them about him. Their only clue was a stone boundary marker they had viewed with a date and the initials C.G.R. incised into it. Beck mentions this in his book More Forgotten Towns of Southern New Jersey. This author has never uncovered anything written about Rockwood except that information noted above, but that is about to change. The following paragraphs attempt to clear the mystery surrounding Charles Greene Rockwood Jr., one of the most unknown men in NJ Pine Barren history.

This story must begin with the subject’s father, Charles Greene Rockwood Sr., who may have played some role in the Rockwood venture, but no confirmation has been found yet. Charles Sr. was born in 1814, the son of Ebenezer Rockwood and Elizabeth Breeze Hazard, and the grandson of Dr. Ebenezer Rockwood. Dr. Rockwood served as a surgeon’s mate at Dorchester Heights near Boston in 1776, and as a surgeon in the years following. His ancestry can be traced back to Richard Rockwood, a planter from Dorchester England in 1636. Charles G. Rockwood Sr. would become a banker serving as the Cashier at the National Newark and Essex Banking Company in Newark New Jersey, apparently working his way upward in stature there in the following years. On January 13, 1887 after the death of the president four days earlier, Rockwood Sr. accepted the presidency of the bank. 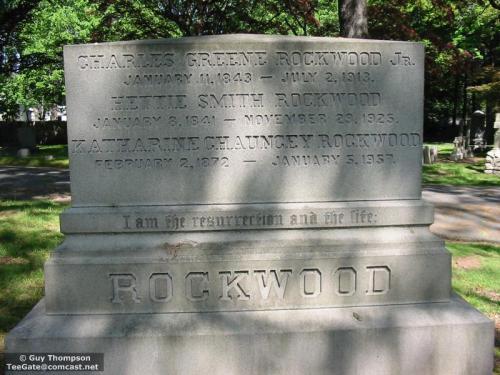 In 1904 Mr. Rockwood completed compiling a book for the 100th anniversary of the bank that year titled One Hundred Years : a Record of the Oldest Bank in the State of New Jersey, but died before completion of the book’s publication. His work on the book, and the fact he did not survive to see the final outcome of his work is mentioned within its pages.

He married Sarah Smith (1812-1893) whose grandfather, Ebenezer Hazard, graduated from Princeton and, in 1775, served as Postmaster under the Committee of Safety, and in 1782 became Postmaster General. Both Rockwood and his wife’s family possessed very historical and strong ties to the American Revolution, but the subject of this monograph became their one surviving male offspring, although the couple had several children. Their son William died at age 1 and daughter Elizabeth just before her fifth birthday, leaving Johanna and Charles Jr. their only known surviving children.

Charles Greene Rockwood Jr. was born January 11, 1843 in NYC and graduated Yale University in 1864. After graduation he continued his studies in higher Mathematics and Modern Languages, and received his Ph.D. in 1866. Later, as class historian, he would publish a book titled History of the class of 1864, Yale College, and the Supplement to the History of the Class of 1864, Yale College. Besides being a Mathematician he also graduated as an Astronomer, with interests in Seismology, Vulcanology, and Solar Heat to name just a few. He served as a Professor of Mathematics at Bowdoin College in Maine (1868-1873), at Rutgers (1874-1877), and eventually at Princeton (1877-1905) where he spent 28 years teaching and resided a block away from the university at 34 Bayard Avenue in downtown Princeton. Ironically, Bayard Avenue today is Route 206 in Princeton, so he lived on the same road as his cranberry venture near Hammonton. 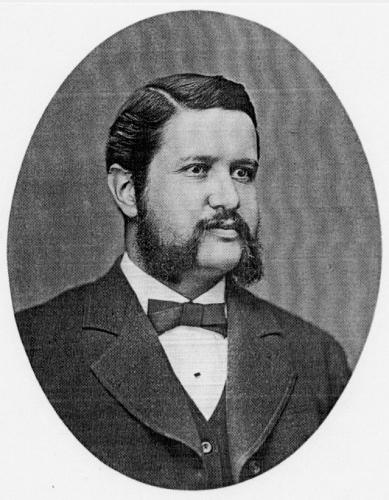 Rockwood held a membership in the American Metrological Society and served as their first secretary. He wrote numerous articles and monographs that appeared in the American Journal of Science concerning his studies on America earthquakes. He also penned annual summaries of progress in Vulcanology for the Smithsonian Institution. He became a member of the National Geographic Society, the U.S. Geological Society, and the New Jersey Historical Society.

Because of his knowledge and interest in the various fields mentioned above, the Director of the U.S. Geological Society asked him to take part in the preliminary report on the August 31, 1866 earthquake in Charleston, South Carolina that killed more than 50 people. After he joined the faculty at Princeton, he participated in Princeton’s expedition to view the Solar Eclipse in Denver, Colorado, and study submarine temperatures in the Gulf Stream.

On June 13, 1867, at New Haven, Connecticut he married Hettie Hosford Smith and had a daughter Katharine (Katie) Chauncey Rockwood who was born on 2/2/1872 in Hudson New York. Hettie’s family, like Rockwood’s, had a rich history dating back to the Revolutionary War and before. She was the daughter of Simeon Parsons Smith and Hettie Hosford Smith, the granddaughter of the Rev. Davis Smith and Catherine Goodrich, and the great granddaughter of Ebenezer Smith (1746-1816) and Sarah Dean. Ebenezer Smith served as a minute man in 1775 and as an ensign in 1776. He served at Ticonderoga, Bunker Hill, the seige at Boston, the capture of the British army officer John Burgoyne, Sullivan’s campaign in Rhode Island, and the Battle of Monmouth.

To help raise Katharine and do the work around the house, Rockwood employed a widowed older black servant from New Jersey (mistakenly overwritten on census schedule with the word “Ireland”) named Catherine Farmer according to the 1880 census. He was not alone in this since his father and many of his neighbors also did the same. Frequent travels to Europe must have been easier with her around.

ockwood was a religious man and attended the First Presbyterian Church in Princeton New Jersey, where the congregants ordained him as a Deacon on April 25, 1880, and an Elder on May 23, 1897, a position he held until his death.

In 1905 Rockwood resigned from Princeton; however, his title just changed to Professor Emeritus of Mathematics, retaining his ties to the institution. At some time after retiring, he and his family moved into the Princeton Inn and he apparently sold his home. With his wealth the luxury of this address may have suited him well. Letters from Rockwood suggest that sometime between this point in time and the end of his life, he resided in Newark as historian J. G. Wilson claimed he did.

By circa 1910, Rockwood’s health began deteriorating from what his doctor determined to be General Sclerosis. During the summer months the Rockwood family lived at the luxurious Monomonock Inn in Caldwell New Jersey, and it was there on July 2, 1913 at 3:00 a.m. that Rockwood’s life ended from this disease. His obituaries and various funeral reports in the Princeton Press in the days following his demise gave testament to a well liked and respected individual. The family held his funeral in Caldwell New Jersey the day after Independence Day, with internment in the family plot located just a few feet off the main road through the center of the Rosedale Cemetery in Orange.

After her father’s death, documents show Katharine substituted and completed some of his responsibilities in his various ventures. She would occasionally have contact with Princeton University concerning her father’s tenure there, but very little has been learned about her in the years following her father’s death. On November 29, 1925 her mother Hettie passed away, and 43 days later Katharine sold the property at Rockwood to Franklin E. and Frank Earl Haines.

By 1931 she still dispatched correspondences from the Princeton Inn with her initials on the stationary, but by October 1933 she resided in Durham Center, Connecticut on Sunset Hill across the street from the Goodrich house, which had been the home of her grandmother, Catherine Goodrich, daughter of Ebenezer Smith. It seems apparent that historical ties to her mother’s family remained strong, since her middle name of Chauncey is obviously taken from her famous relative Chauncey Goodrich, the lawyer and politician from Connecticut.

She died in 1957, retaining the last name of Rockwood to the end, apparently never marrying. Relatives, presumably from her mother’s family, interred her remains in the family plot with her parents. Since she was the only child, the Rockwood family name ended with her.

How Joseph Wharton came in contact with Rockwood is currently unknown, but one could speculate that as a banker the elder Rockwood surely could have had financial contacts with the Quaker land baron. It seems obvious that Wharton, while buying much of the land in that area, sold many parcels to what may have been friends and business partners. One example of that is the portion of the West Mill tract we know as Paradise Lake Campground, which Andrew Rider, the founder of Rider College, purchased from Wharton in 1898, and various cranberry companies purchased many of the parcels along what is now Route 206 from Wharton, in many instances just a year after Wharton had acquired them from their previous owners, some of them being cranberry companies.

On February 9, 1887 Charles G. Rockwood purchased what appears to be over 500 acres from Joseph Wharton, all of it on the east side of 206 just north of what is now Paradise Lake. Most likely when Rockwood purchased it, lessees already operated the cranberry bogs there along with a possible blueberry operation.