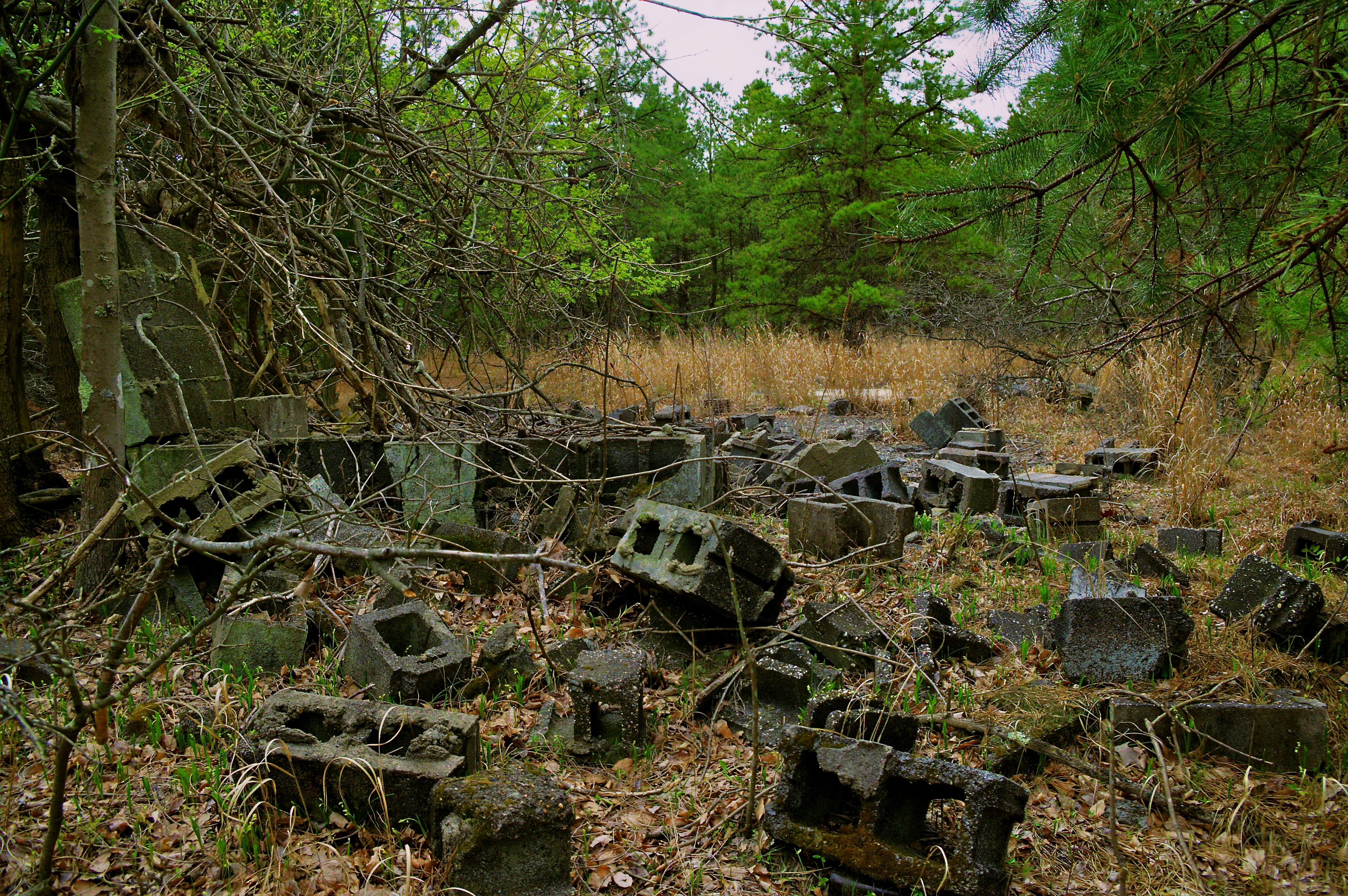 Hidden back in the woods near Buckingham, the deserted station stop of the Pennsylvania Railroad that brought visitors from Philadelphia to Long Branch in the late 19th century, a scattering of cinderblock bricks forlornly marks the location where a hunting club once stood. Here, in country aptly described as “dismal even on a sunny day” by the late Henry Charlton Beck, scarcely a foot may tread.

I first explored the ruins, plainly marked out on the USGS topographic map of the area, sometime in the summer of 2006. I had explored the area near Buckingham several years prior, but never ventured off the wide, sandy road that follows the right of way of the defunct railroad. I had never ventured down the side roads that plunged deep into the foreboding woods that were fringed with ominous swamps.

The way to the ruins turned out to be easy enough – follow what the maps call “Lebanon State Forest Road” which cuts into the woods near St. Stephens Episcopal Church on Route 539 in Whiting to Butler Place Road. Make a right at the first sandy intersection and you’ll soon pass some small ruins on your right. These, to me, seem to be old sawmill that John Buckingham erected in the 1880’s. Handsomely built of concrete, they stand as testament to the quality of construction that Buckingham called for in his town. Shortly after that, to the left, will be a pair of old posts – presumably a fence or gate of some sort – and the tumbledown ruins of the gun club.

So what of the club? There’s scant clues at the ruins to tell what it is. The wooden posts at the front of the property are in relatively good order which, to me, would indicate that the ruins date to the latter part of the 20th century. This is confirmed by the cinderblock construction – anything older and it would be poured concrete, stone, or wood. Nothing appears here on the 1930 aerial photographs, although the 1963 aerials show what appears to be a building on the site. By 1970 the entire area is cleared and a building is onsite, but appears to be in ruins by 1986. Curiously it looks like the owners of the property dug a small pond in the back which still holds water today.

The day I visited the heat was oppressive, and swarms of biting flies were ever present as I surveyed the remains of the building that must have fallen down decades prior. The footprint of the structure was impressive, with a well-laid floor of stone and concrete. The walls were constructed with cinderblocks, the building material of choice for these types of hunting clubs that would generally only see seasonal habitation. An ancient refrigerator – most likely propane powered for there are no poles to carry electricity here – lay on its back baking in the hot July sun. Behind the ruins was a metal shed, peppered with buckshot and slug holes. I left, having been chased away by the flies.

I came back in February of 2008, taking my new Jeep out on its maiden run through the Pines. A light snow had fallen, and the ruins were dusted in picturesque patches of white powder. Gone was the refrigerator and some metal beams that had been set in the concrete floor – victim to a traveler who was more interested in the scrap value of the remains than keeping them intact for others to enjoy. The flies were gone, thankfully, but a chill wind and a desire to press on to explore the remains of a nearby cranberry bog made for a swift retreat.

Four years later finds me back at these ruins. The spring weather is enjoyable, and gone are the oppressive flies, replaced by dozens of young black dragonflies to keep me company. As always, time presses on and, at some point after I last visited, another vandal or scrapper came by and took down the metal shed. A pile of wood scattered around and left to rot is all that remains of it.