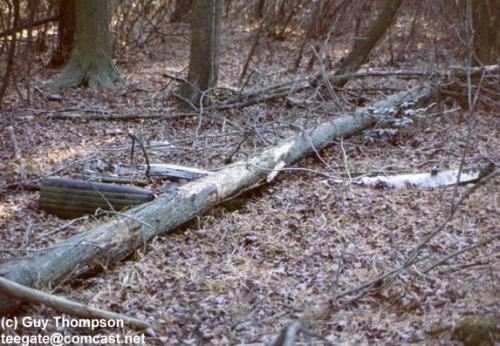 In January of 1971 the war in Cambodia was expanding, George McGovern made his presidential bid official, William Cahill was NJ Governor, and practice at the Warren Grove bombing range was ongoing. On January 16, 1971 an F-105 Thunderchief took off from McGuire Air Force Base on what was intended to be a routine bombing run at Warren Grove. The F-105 is a single seat, single engine supersonic jet capable of traveling at 1,386 mph that was the first jet designed to release Nuclear warheads at supersonic speeds.

At the controls of the F-105 was a United Air Lines pilot who was also the flight commander with the Air National Guards 141st Tactical Squadron. Residing in River Vale NJ, he was on his weekend assignment for the short flight from McGuire to Warren Grove. Major William F. Dimas, age 36, was en-route when something happened that my investigations have not yet revealed.

At about 11:35 A.M. Major Dimas who was married and a father of two sons and a daughter, lost his life when his plane struck some trees 100 feet from the Bear Swamp Hill Fire Tower, and then proceeded to hit the tower and a generator building at the towers base. The tower was struck 19 feet 6 inches from its base completely destroying the tower and observation platform. The plane ended it’s journey 3/4 of a mile away coming to rest at a spot near the Papoose Branch.

The crash cut a path across the top of Bear Swamp Hill 32 to 40 feet wide destroying about 988 trees during the incident. Blurry black and white photocopies taken after the crash pretty much look the same as this photo taken by a friend of mine in 1976.

On January 29, 1971 the USAF sent the N.J. Bureau of Forestry the claim form that was needed for the state to be refunded the money for the cost of the damage of the accident. On February 10, 1971 William B. Phoenix the State Fire Warden sent a revised claim to the USAF for the damage. Excluded from the claim was the cost for a $1.250 radio base station that was found to be inoperable at the time of the crash. A partial list of the claim are as follows.

There was an estimated 988 trees damaged at a cost of 1 dollar per tree which would be replaced by a professional forester. The total cost came to $19,277.27.

On November 8, 1971 Allan M. Tyrrell, a claims officer for the Air Force notified William B. Phoenix that due to the amount of the claim, the jurisdiction was passed to the Air Force “Headquarters” for consideration.

We have all wondered why the tower was never replaced, and I think you all can surmise by the length of time from the accident until the last letter from the Air Force why there is not a tower there presently. Also, when a claim is sent to “headquarters” there usually is a reason for that and it rarely is good. Read on:

Here is the abbreviated text of a letter dated Jan 14 1972 almost one year after the crash from Colonel William E. Shannon of the USAF to William B. Phoenix the State Fire Warden.

The claim of the state of NJ for property damage arising out of the crash of a NJ ANG aircraft on 1/16/71 has been considered and denied. This action was necessitated because of claims for property damage caused by members of an Air National Guard unit who are employees of the claimant state are excluded from payment. Under the circumstances, there was no alternative but to deny this claim.

Today all that remains on Bear Swamp Hill are the crumbling cement foundation of the fire tower. Even the wooden bathrooms for the recreation area have been removed by either the state or by vandals. The only evidence left of the plane is one landing gear located in the swamp nearby, which is slowly sinking into the ground. Serial numbers on the gear are still in perfect shape due to the high quality chrome used on supersonic planes.

The F-105 Thunderchief flew for the first time on My 27th 1958, and was capable of twice the speed of sound. It was the first jet that was able to drop it’s bombs at supersonic speed and was used extensively in Vietnam. It is one of the few military jets that was never exported for foreign use, and many were used by the Air Force Reserve and the National Guard. The F 105 was a single seat fighter with a top speed of 1,386 mph, and was built by Republic Aviation Corp with 833 of them manufactured at a cost of 2.14 million each. It was originally built to deliver Nuclear weapons, but many of them were used with conventional bombs, and it was the largest single-seat, single-engine fighter ever built. It was retired from service in August of 1981 and up until that time it was the first Air Force aircraft to have a formal retirement ceremony.