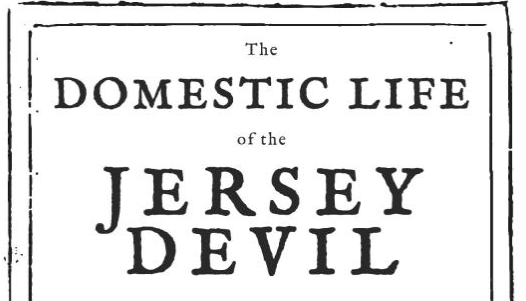 Bill Sprouse’s book, The Domestic Life of the Jersey Devil, chronicles his investigation into the origins and meaning of the Jersey Devil myth. When Sprouse was young his grandmother, Helen Leeds (lovingly referred to as BeBop throughout the book), told him the story and how he was distantly related to the creature. That was enough to pique his interest and his years of research and investigation ultimately led to this book.

The most commonly told story about the origin of the Jersey Devil is that it was born in 1735 in the backwater village of Leeds Point on the fringes of the New Jersey Pine Barrens. “Mother Leeds”, a Quaker who some whispered about dabbling in witchcraft, was pregnant with her thirteenth child. Exasperated at the prospect of another child to rear she exclaimed, “I am sick of children! Let it be a devil!”

A few months later Mother Leeds and her midwives watched in horror as the features of the baby began to distort into a demonic image minutes after the birth. Bat-like wings emerged from its back as its twisting and writhing body took on a long, serpent-like shape. The head of the child elongated into something not unlike the head of a horse. Mother Leeds’ curse was finally fulfilled as hooves replaced the baby’s hands and feet. Suddenly the creature leapt up from the bed and beat everyone in the room with its long forked tail. The creature unfurled its wings and with a scream shot up the chimney and escaped into the dark night and out into the Pine Barrens, where it continues to live today.

BeBop traced her family line down to Deborah Leeds, wife of Japhet Leeds, who lived in Leeds Point in the 1730s and whose will shows that she had twelve children. Japhet was the son of Daniel Leeds, who was one of the earliest authors in New Jersey. Daniel, calling himself a “Student of Agriculture,” published an almanac in 1687, predating Benjamin Franklin’s famous Poor Richards Almanac by forty-five years. Years later Benjamin Franklin would refer to Leeds as an “astrologer.”

Daniel’s almanac ran afoul of the Quakers who were shocked by the “heathenish” elements in the publication. Like most other publishers of almanacs in the 17th century he included occultist information that the author claims made the almanac an “astrological toolkit.” Various sources claim that the Quakers were so incensed at the publication that they ordered an apologetic Daniel to burn every unsold copy.

Daniel’s very public repudiation by his Quaker peers and the increasing amount of tension with them led him to leave his homestead in Springfield, just outside of Burlington, and move his family across the state to a wilderness that would eventually become known as Leeds Point. Safely out of reach there he continued to write increasingly inflammatory anti-Quaker pamphlets denouncing the Philadelphia Meeting who then returned the favor in kind, labeling him as “Satan’s Harbinger.” Daniel’s almanacs were printed in New York City, and while Leeds Point was far off the beaten path, it was not as cut off from the rest of the world as many would imagine. It’s no stretch to think that news of Leeds’ daughter-in-laws pregnancy would have reached his detractors in Philadelphia, would jump at the chance to invent a story about a demonic child to make a strong case that the Leeds family were being punished for straying from their Quaker ways.

The theory that the schism between Daniel Leeds and the Quakers of Philadelphia is the source of the Jersey Devil myth is not new, although Sprouse – who disclaims that he is not a professional historian – does an exemplary job of researching the facts and providing footnotes to enable the reader to research more on their own. The book reads more like a John McPhee-type essay than a dry history tome as the author mixes history with his own stories of his grandmother and his interactions with various locals as he tries to figure out what the Jersey Devil actually is.

Readers who are looking for a book that will confirm the existence of the Jersey Devil will be disappointed, as the author makes no bones about his disbelief of the creature. Those looking for a well thought out, entertaining look at the origins of the Jersey Devil myth would be happy that they picked this book up. The only one minor drawback to the book is that it can be hard to follow at times as the narrative jumps around, often back and forth in time, quite a bit between chapters. Several times a chapter will end, the next chapter will go on about something else entirely, and the chapter after that will pick up where the first left off. Those are minor annoyances and shouldn’t take away from the otherwise excellent writing and research found throughout the book.