It was the summer of 1968 that we met by chance on the edge of the West Plains near Coyle field. While photographing buck-moth caterpillars, I noticed a crouching figure nearby that I presumed was a piney gatherer. This notion was quickly dispelled when he introduced himself in a clear Bostonian accent as Howard Boyd, an entomologist and an administrator with the Boy Scouts of America. He said that he had been coming to the Pine Barrens for many years, especially to study tiger beetles. Little did I suspect that this encounter was the beginning of an enduring friendship that would last until Howard’s recent death on December 20, 2011, at the age of 97.

Having produced several fine 16 mm nature films (e.g., A Place in the Sun and Life on a Coastal Plain), the Boyds were popular touring lecturers in the Audubon Society’s Wildlife Film series during 1966 to 1976. When Howard and his talented wife Doris moved to Tabernacle, NJ, in 1969, our lives became frequently intertwined in exploration and preservation of the Pine Barrens. As members and officers of the Burlington County Natural Sciences Club, Howard and I led or participated in many field excursions into the Barrens, exchanging ideas and sharing our independent research. On three occasions in the 1970s, the two of us set out on day-long surveys determined that we would be able to rediscover an occurrence of the long-lost post-oak locust, Dendrotettix quercus, swarms of which had devastated oak forests in the vicinities of Bamber, Ridgeway, and Mt. Misery during the early 1900s. Although unsuccessful in finding any specimens of this destructive grasshopper, we both remembered these excursions in later years as fine opportunities to becoming better acquainted.

Similarly, our paths crossed frequently at Whitesbog in the 1970s, where I was conducting extensive botanical surveys and was engaged as a botanical consultant by Dr. Eugene Vivian (Glassboro State College, now Rowan), Director of the Conservation and Environmental Studies Center (CESC). I clearly recall Howard’s delight when he accepted Vivian’s offer to be a nature study instructor in the program. The “boy scout” eternally flowed in Howard’s veins, and he derived immense joy from passing on to youngsters his vast knowledge of the natural world. When Vivian retired in 1984, Howard continued to serve as an instructor for several more years under Garry Patterson, director of the same program, but under a new name, the Pinelands Institute for Natural and Environmental Studies (P.I.N.E.S.). 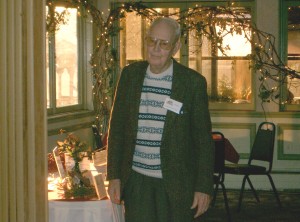 Howard Boyd, at Lines on the Pines. Photo courtesy of Linda Stanton.

Howard, among others, convinced his Audubon Society colleagues to establish in 1977 the Rancocas Nature Center in Westhampton, under the capable directorship of Karl Anderson. Howard also supported Anderson’s brilliant idea of holding an annual Audubon Society’s Pine Barrens Weekend, a three-day event each June, at a church camp on Mt. Misery. Fondly edged in my memory are our thirteen years of involvement (1981-1993) as lecturers and trip leaders at this popular annual event. The comradeship was incredible, and we both looked forward to learning from each other and other leaders, especially during the Saturday evening informal “wrap-up” session that reported the finds of the day.

As a scientist, Howard P. Boyd, a former president of the American Entomological Society (1977-1981), was first and foremost an entomologist, but an entomologist with a strong background in multiple facets of Pine Barrens ecology. His field of expertise was tiger beetles. On unannounced visits to his home, I invariably found him engaged in his entomological studies or devotedly editing the society’s Entomological News. He served as editor for almost 30 years. Among his scientific publications that may be of interest to the layman are “Collecting tiger beetles in the Pine Barrens of New Jersey,” Cicindela 5:1-12, 1973; (co-authored with Philip E. Marucci); “Arthropods of the Pine Barrens,” in (Foreman, R.T.T., ed.), Pine Barrens: Ecosystem and Landscape, Academic Press, 1984 (co-authored with Philip E. Marucci); “Host plants of cranberry tipworm,” Cranberries: The National Magazine 48:6-9; and “Arthropods taken in pitfall traps in the Pine Barrens of New Jersey,” Entomological News 106:45-56; 1995.

When Howard came to my home in 1990 to deliver a copy of his manuscript, A Field Guide to the Pine Barrens of New Jersey, that he wanted me to review (particularly the section dealing with the plants), I was at first pleasantly surprised that he had chosen me. Then suddenly it occurred to me that he had referred to me as “My Botanist” for many years now, and we had cultivated a strong friendship and a mutual respect for one another’s abilities. He indicated that the guide offers nothing that is really new, but is packed with a gamut of information that will answer just about any question that a Pine Barrens novice might have. I soon discovered how right he was and told him that I had no doubt that his guide would be in demand for years to come. Twenty-one years have passed since its publication and the book’s popularity has not waned.

A second book titled A Pine Barrens Odyssey followed in 1997. It is a pleasant read that takes the reader on a journey of the Pines through the four seasons. This was followed in 2001 by Wildflowers of the Pine Barrens of New Jersey, a beautifully illustrated volume of 130 photos (with descriptions) featuring primarily Howard’s photos of common as well as rare species. About a year before its publication, Howard asked me to show him a site of one of our rarest plants, the southern yellow orchid. It was subsequently depicted in the book. Howard’s final book, The Ecological Pine Barrens of New Jersey, was published in 2008, when he was 94 years old. Once again Howard asked me to conduct a review. In the Preface he states, “I claim no original authorship for the material within this offering.” His aim was to assemble in a single volume “the most important subject matter” on all aspects of the ecology of the Barrens, eliminating the necessity to consult other references. He believed the book could serve “as an introductory text for courses at the upper high school and early collegiate levels.” This book was not an easy one to write, and I marvel that Howard, at such an advanced age, had the fortitude and prowess to pull it off.

Hopefully, an instructor or two will test its efficacy in the classroom. In many ways Howard Boyd was a remarkable man who led a very productive life. Those of you who were fortunate to have him as a teacher can attest to that. He left behind a legacy of four books that reveal his broad spectrum of interests and knowledge. His outstanding field guide will, no doubt, stand the test of time. It was a privilege to have Howard as a friend for more than 40 years, to have walked with him the trails of our beloved Pine Barrens on many occasions.

Allow me to share his generous tribute that he wrote on the title page of my copy of his The Ecological Pine Barrens of New Jersey.

“Many thanks for your review and valuable suggestions on the section dealing with Pine Barrens flora. Of all our Pine Barrens associates, I know of no one more knowledgeable and authoritative than you.  Much appreciation and kind personal regards.”

I shall always cherish these kind words and Howard’s memory. You will be missed, my friend. Farewell!