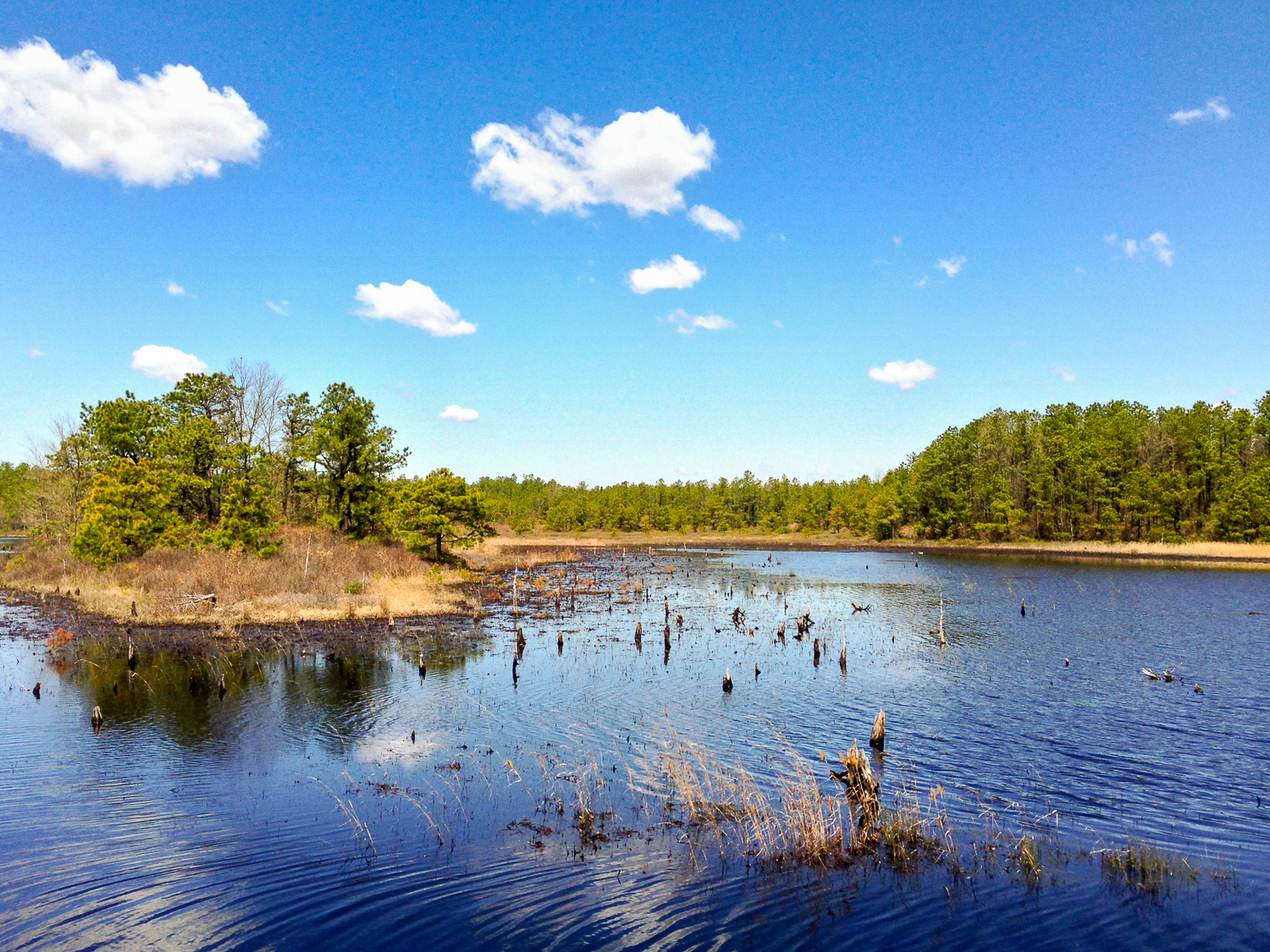 Update: As of 2/14/2021 there is a break in the Red and Green trails at the Parker Preserve. Click here to see a map with the break circled in black. Keep an eye on the Parker Preserve website for updated information before you travel.

The Franklin Parker Preserve is a 9700-acre nature preserve in Burlington County owned and managed by the New Jersey Conservation Foundation. Named for Franklin E. Parker III, the first director of the New Jersey Pinelands Commission, the preserve contains the former cranberry farm of Garfield DeMarco who sold his land to the foundation in 2003, albeit not without some controversy.

Over the subsequent ten years the foundation, in partnership with the New Jersey Department of Environmental Protection, began to restore the cranberry bogs to their native state and replant stands of Atlantic White Cedar that had been affected by decades of cranberry growing.

There are 21 miles of hiking trails, including a stretch of the Batona trail that had been rerouted through the preserve to provide a more scenic hiking experience for the trail in this area. There are four main trails: the Green Trail, a 6.7 mile loop that runs along the agricultural roads around the former cranberry bogs; the White Trail, a 3 mile loop that offers spectacular views of the Bald Eagle Reservoir; the Yellow Trail, a 5 mile loop that runs along the cranberry bogs located in the southern portion of the preserve and alongside the west branch of the Wading River. Finally there is the Red Trail, a 6-mile loop that meanders along the bogs and in and out of upland forest and cedar swamps. The Red Trail is a footpath that is open to hiking and cross country skiing only, while the other trails – save for a portion of the Yellow Trail which is only a footpath – are open to hiking, cross country skiing, horses, and cycling.

I recently took advantage of some incredible spring weather and hiked the Red Trail for the first time. The trail really gives you a nice glimpse of everything that the Pine Barrens offers: pitch pine forests, cedar swamps, cranberry bogs, reservoirs, and even some weird ruins out in the woods. I’m a pretty novice hiker and I found the trail to be fairly easy and enjoyable.

The trail begins at the Chatsworth entrance to the preserve. As you’re facing the entrance the trail plunges into the forest on the right just before the gate. Look for the red blazes on the trees. 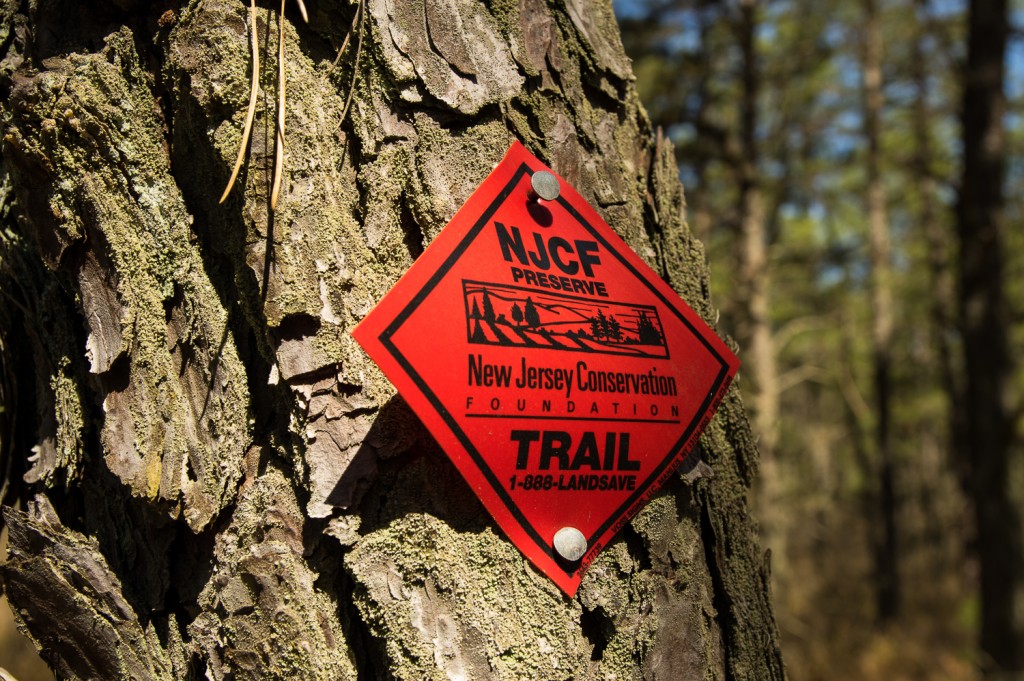 Shortly after I started down the trail I came across a small clearing in the woods and found a silver mylar balloon stuck in a tree. Without fail, I see at least one of these balloons every time I visit the Pine Barrens. It might seem cool to let them float away when the party is over, but they don’t just evaporate into thin air. Eventually the helium escapes and the balloon finds its way back to Earth. This is a huge pet peeve of mine. 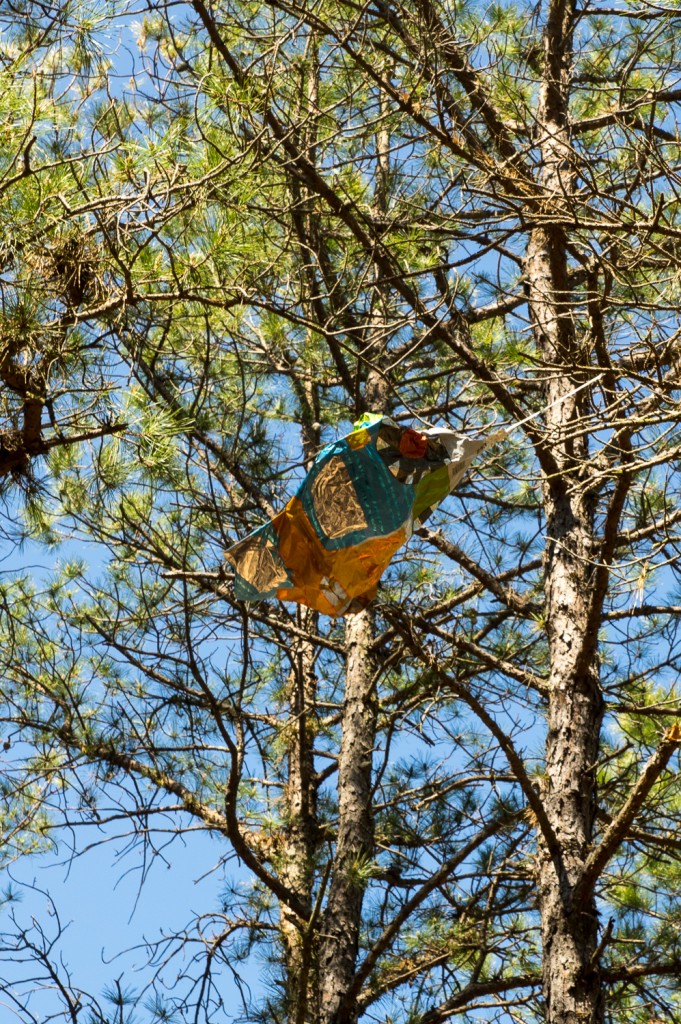 The trail will meet up with, and run parallel to, Bertha’s Canal. The canal brought water from nearby Chatsworth Lake to fill the DeMarco bog’s reservoir. The waters are quiet, still, and tranquil. The banks of the canal are slightly overgrown so it will be difficult to get a picture without some stray foliage in the foreground. 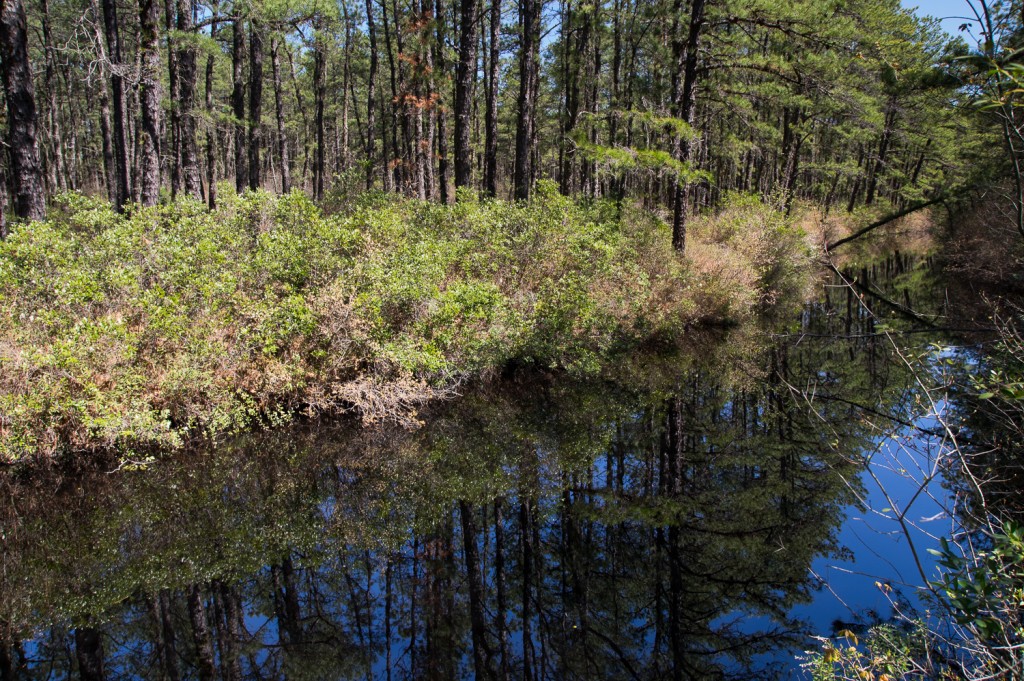 Eventually the canal will intersect one of the branches of the Wading River. You’ll notice a meadow through the trees to your left and the trail nearly doubles back on itself. It’s a little confusing as the blazes for the continuation of the trail are not really obvious. I briefly started down a different path before I realized I had lost the trail. While the majority of the trail is blazed very well, there’s some spots where it’s not readily apparent where you need to go which can be a little frustrating and unnerving. It’s a small, but annoying, quibble I have.

From there the trail continues on into some lowlands. Hopefully you have some waterproof boots, because you’ll need them. I was wearing a pair of trail runners and despite my best efforts at leaping from what patches of high ground I could find, my right foot eventually got sucked into some wet mud. This section of the trail could definitely use a little wooden causeway or even some logs thrown down. Here, again, the blazes get confusing. The last blaze is visible on the tree in the picture below, but there’s no apparent trail past that. The trail picks up along a causeway that is 10 or 15 feet further on, with the next blaze further down the trail. It’s not easy to see, and when the vegetation grows in it’ll be even harder.

A little further down the causeway there is a nice primitive bridge to get you over a cut between two bogs. 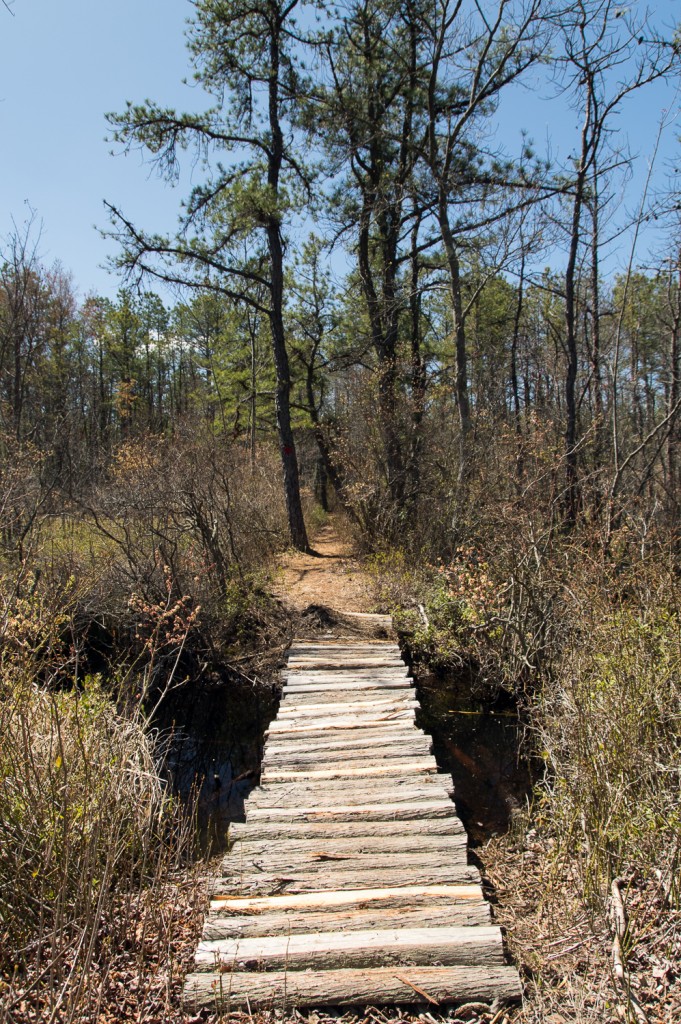 The trail will bring you out to the old Central Railroad of NJ tracks nearly buried in a bed of pine needles. It was near this spot on August 19, 1939 that the famous Blue Comet train derailed, injuring thirty eight people and destroying a section of track. You can still see old railroad ties that were replaced when the track was repaired piled up on either side of the right of way.

Crossing over the tracks and continuing on the trail eventually brings you to the most scenic portion of the hike – the DeMarco Cranberry Meadows Natural Area. These former cranberry bogs are slowly being reclaimed by nature. If you’re lucky to be there on a beautiful day with a clear sky the view is tremendous. The trail winds around the fringes of the bog and briefly meets up with the Green Trail before heading back into the woods.

Further along the Red Trail are the ruins of one of the pump houses that moved water between bogs. At one time there was a large pump installed on a thick concrete base. The pump is gone and the building appears half demolished. I’m not sure if it fell down or was vandalized. One of the best things about hiking in the Pine Barrens – especially along old abandoned roads – is coming across ruins like these. As I mentioned in the beginning of the article the Red Trail gives you a really good impression of what exploring the Pine Barrens is all about.

Benches have been placed along the trail at scenic locations, however nothing beats these oversized wooden chairs. They look more fun than they are comfortable.

There’s a pretty substantial bridge where the trail crosses the west branch of the Wading River. This might be the best built bridge on any hiking trail in the pines.

Shortly before the trail brings you back to the parking area you will cross the CRRNJ tracks again. There’s an interesting metal barrier put up across the tracks further up the line. It’s been decades since a train has gone down these tracks and pine trees have grown between the ties. There’s nothing for that barrier to stop. 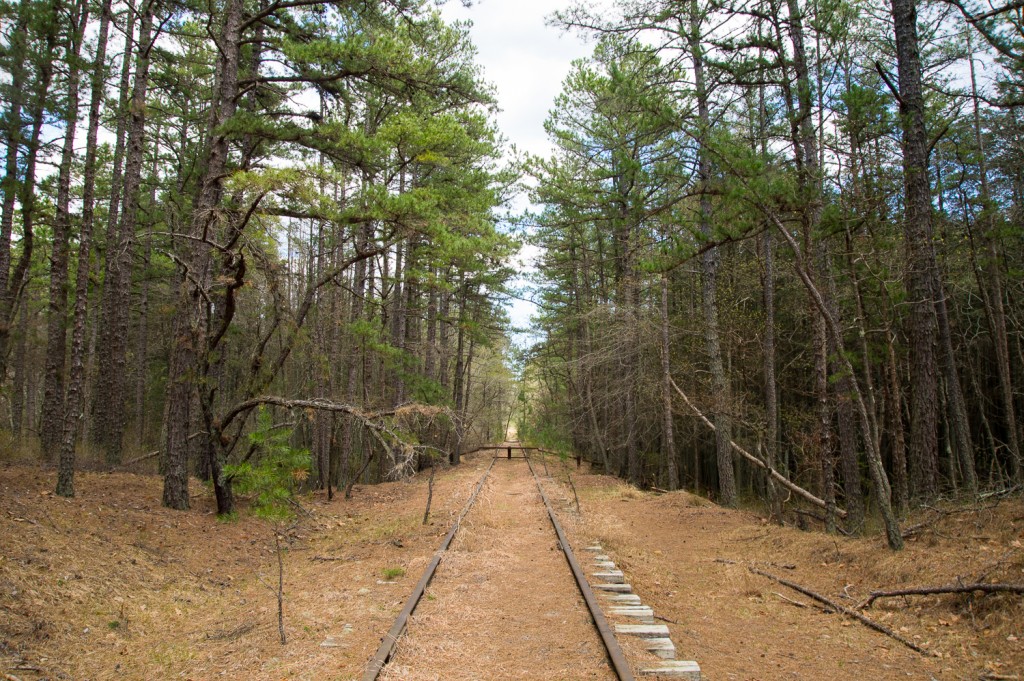 Overall I’d say that this is a moderate trail. There’s really not much in the way of elevation changes, although it does get a little hilly in the area before the giant chairs. The most difficult parts are where the trail is wet and when the trail shifts direction and the blazes are hard to find. I would suggest that hikers visit in the winter or spring. It’s a bit overgrown in spots and there’s a lot of vegetation to brush up against as you hike. Ticks and chiggers love it when you brush up against the vegetation they’re waiting on. I was lucky and only found a single tick on me as soon as it hopped on from some brush. As the season progresses it will only get worse. At a minimum wear some strong insect repellant and long sleeve pants and shirt.

The trail runs just about 6 miles and took me about 3 hours to complete, hiking at a leisurely pace and stopping often to take pictures.