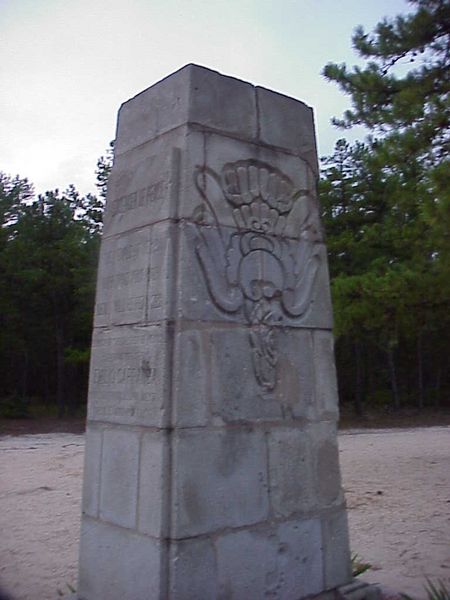 Few people have probably heard of the events that transpired on July 13, 1928 in Burlington County. Even fewer people would known that during the age of the great aviators, Mexico would have their own Lindbergh – a figure of great patriotism and a hero to the Mexican people.

The residents around the area of Chatsworth and Tabernacle in Burlington County, however, know of the events. Lost in the seclusion of the Pine Barrens, a lone monument made of stone quarried around Mexico City stands guard in a clearing off Carranza Road, near the ruins of Friendship and the Wharton State Forest.

Emilio Carranza, the great-nephew of President Venustiano Carranza, was chosen by the Mexican government to make a good-will flight non stop from Mexico City to Washington in formal response to a similar flight that Charles Lindbergh had flown the previous December. He took flight in his Ryan monoplane on June 11, 1928 and landed in Morresville, North Carolina, where he ran into heavy fog. He had, however, failed to complete his mission, and planned to make another flight from New York to Mexico City.

After a stay in Washington and New York, he took off from Roosevelt field on July 13th. It had been a day of severe thunderstorms, and he left thinking it would be clear as he moved south. As he headed South, he ran into another storm over the Pine Barrens, and lost control of his plane, coming down in Tabernacle Township, near where the present memorial stands today. A Chatsworth resident and his wife came upon the wreckage while gathering blueberries, and a few days later a salute was fired as the body left Penn Station on it’s sad trip back to Mexico City.

The monument was erected by the Mount Holly American Legion Post 11, and is inscribed both in English and Spanish:

Messenger of Peace. The people of Mexico hope that your high ideal will be realized. Homage of the children of Mexico to the aviator Captain Emilio Carranza, who died tragically on July 13, 1928 on his good will flight.