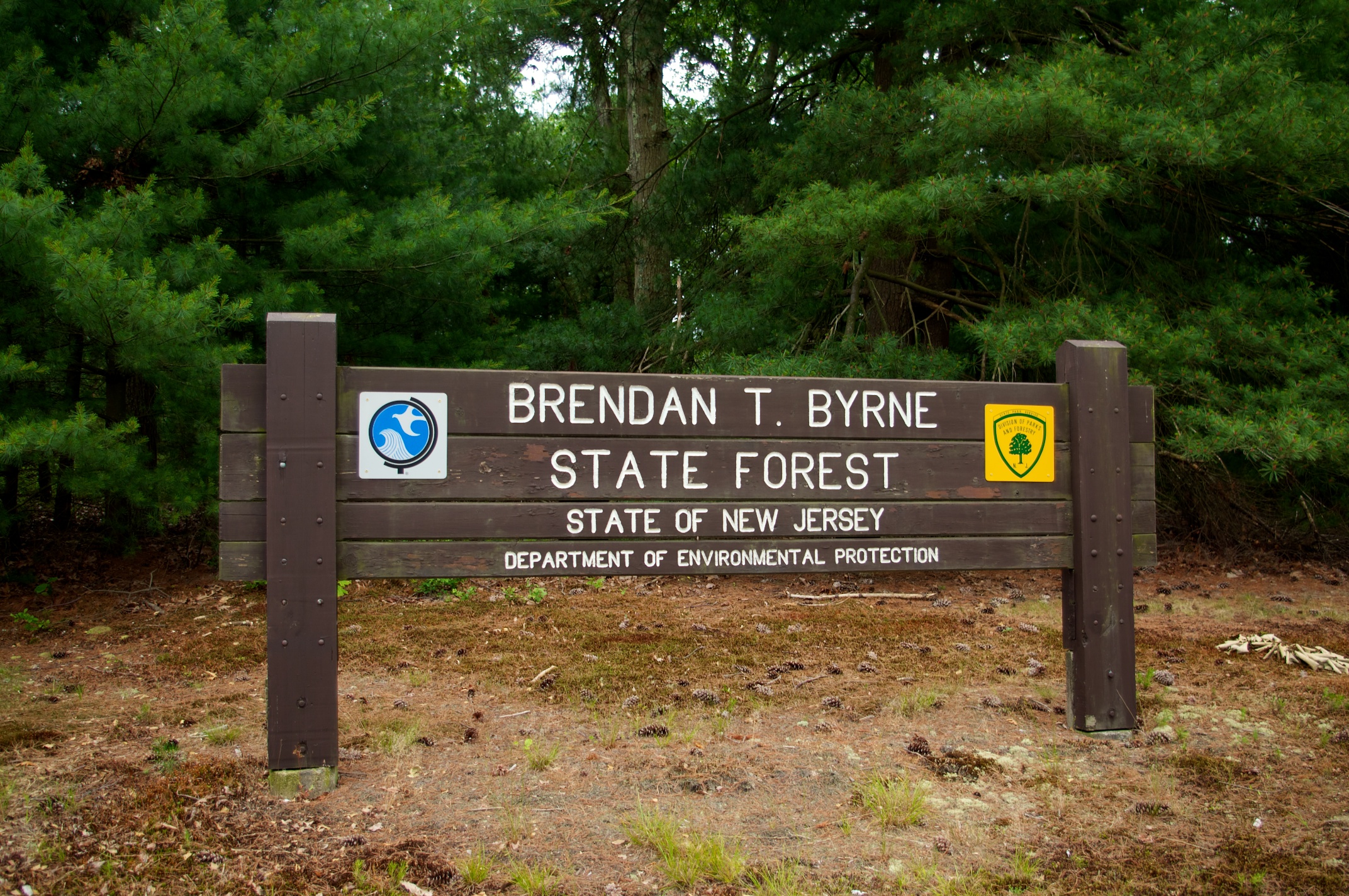 Brendan T. Byrne State Forest, formerly known as Lebanon State Forest, is located in the northern part of the New Jersey Pinelands. It’s location and convenient access to State Route 70 make it convenient to reach from North Jersey, Pennsylvania, and New York. The park is made up of 34,725 acres of pine, oak, and cedar forest stretching through parts of Ocean and Burlington Counties. The park is named for Brendan Byrne, former governor of New Jersey, and the signatory of the Pinelands Preservation Act of 1979, which created the Pinelands National Reserve.

The forest was originally named after the Lebanon Glassworks, which operated here between 1851-1867. The name came from Lebanon in the eastern Mediterranean, a place famous for its cedar trees, which are also plentiful in the swamps of the Pine Barrens. The factory chiefly made windowpanes, although bottles and a few decorative pieces were also produced. The factory shut down when the supply of wood for the furnace was exhausted. All that remains of Lebanon Glassworks today are a scattering of concrete foundations.

Nearby Whitesbog village is another attraction. Whitesbog has been a major cranberry farm for over one hundred and twenty years. At the turn of the 20th century, Whitesbog was the largest cranberry farm in the United States. In 1916 Elizabeth C. White, in collaboration with Dr. Frederick A. Coville successfully developed the first cultivated blueberry. Today the village has been preserved by the efforts of the Whitesbog Village Trust, and the cranberry bogs and blueberry fields still produce a bountiful harvest each year. Visitors can come and see the semi-restored company town and walk out among the bogs. The Whitesbog General Store is open on Saturdays and Sundays from 10:00 a.m. to 4:00 p.m. from February through December, and carries various food items such as blueberry and cranberry preserves, marmalades, honey, and assorted candies. The store also carries a number of handmade craft items as well as a selection of Pine Barrens themed books. An annual Blueberry Festival is celebrated here during the summer.

Getting around Brendan Byrne State Forest is relatively easy. Many of the major roads through the forest, especially those leading to the campgrounds, are paved. The unpaved roads are best left to people with four wheel drive vehicles, although even with four wheel drive it is possible to get your vehicle stuck. Care should be taken driving as the rangers are not able to help pull a stuck vehicle, and calling for a tow truck is expensive.

New Jersey state law states that off-road vehicles such as quads and dirt bikes are prohibited on state land. Motorized recreation in Brendan Byrne State Forest is allowed with special conditions. A vehicle that is properly licensed and insured for on-road use in the State of New Jersey is permitted within the bounds of the forest. This includes cars, SUVs, pickup trucks, Jeeps, and dual-sport motorcycles. All vehicles must stick to “designated roads” – the definition of which can be up to the ranger’s discretion, although a safe bet that you’re allowed on any road or trail that is marked on a street or topographic map. Topographic maps for the area are available online. The rangers have no tolerance for people leaving roads, making new trails, or disturbing or destroying wildlife in bogs or wet areas. Be wary of parking alongside a road – the hot exhaust system of a vehicle may ignite the tall, dry grasses that sometimes line the dirt roads.

93% of the land within Brendan Byrne State Forest is open for hunting and trapping. Hunting is allowed during specific seasons according to the schedule posted by the New Jersey Division of Fish & Wildlife. Bow hunting for deer is one of the most popular sports. During hunting season it’s advisable to wear blaze orange or other brightly colored clothing to make yourself visible.

Hiking is also a popular activity in Byrne. The famous Batona Trail is a fifty mile tail that connects Wharton, Brendan T. Byrne, and Bass River State Forests. A typical through-hike along the trail will take approximately three days. There are over 25 miles of marked trails throughout the forest. The Mount Misery trail also allows visitors the option of mountain biking. The Cranberry Trail is also wheelchair accessible. Two other trails intersect with the Batona and provide loops of about six and fourteen miles for shorter day hikes. Trail maps are available at the Ranger Station near the main entrance to the forest.

(Note, there is no fee charged for entrance to the park.)

Batona Trail Map and Brochure from the NJ DEP