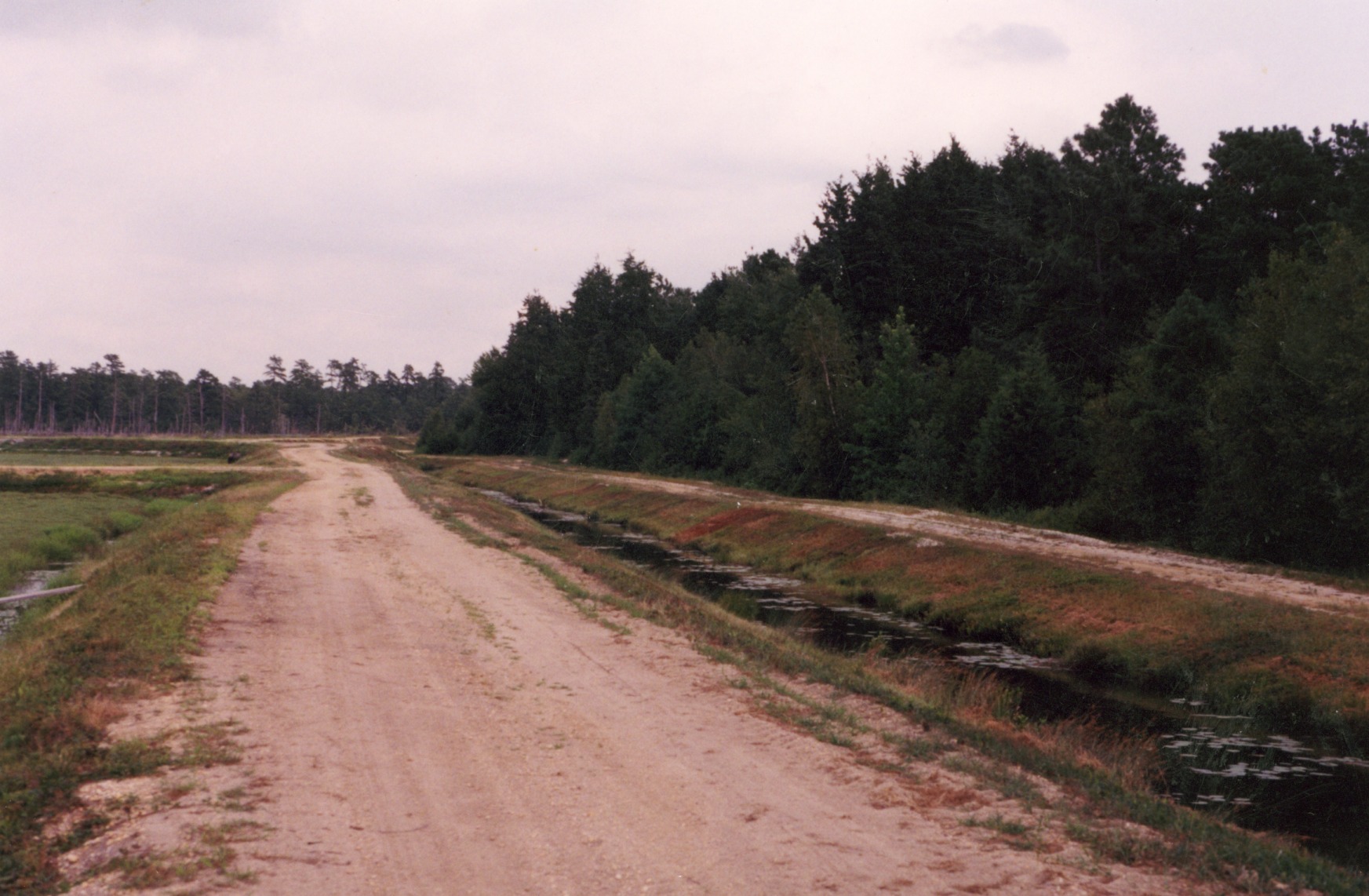 It was a hot July afternoon in 1997 when I pulled onto a Pine Barrens dirt road for the first time. Armed with a copy of “The Pine Barrens” by John McPhee, a map of Burlington County, a 1989 Mercury Cougar, and my courage, I began my first foray into Pine Barrens exploring.

Around that time, Weird NJ magazine had started to get a following, and like many other kids my age, the thrill of exploring the old and abandoned was a sirens call. I had been in contact with the editors of WNJ and they were interested in any articles I could come up with about Southern New Jersey since their magazine had a decidedly North Jersey bent.

I decided to write a piece on Emilio Carranza, the Mexican aviator who crashed during a thunderstorm near Tabernacle on the return leg of his Mexico-New York goodwill flight. I could have easily taken the paved road in from Tabernacle – Carranza Road – to the monument, but that didn’t sound like much fun. The Pine Barrens are lined with dirt roads, some of them old wagon trails, why not try to take one of those? 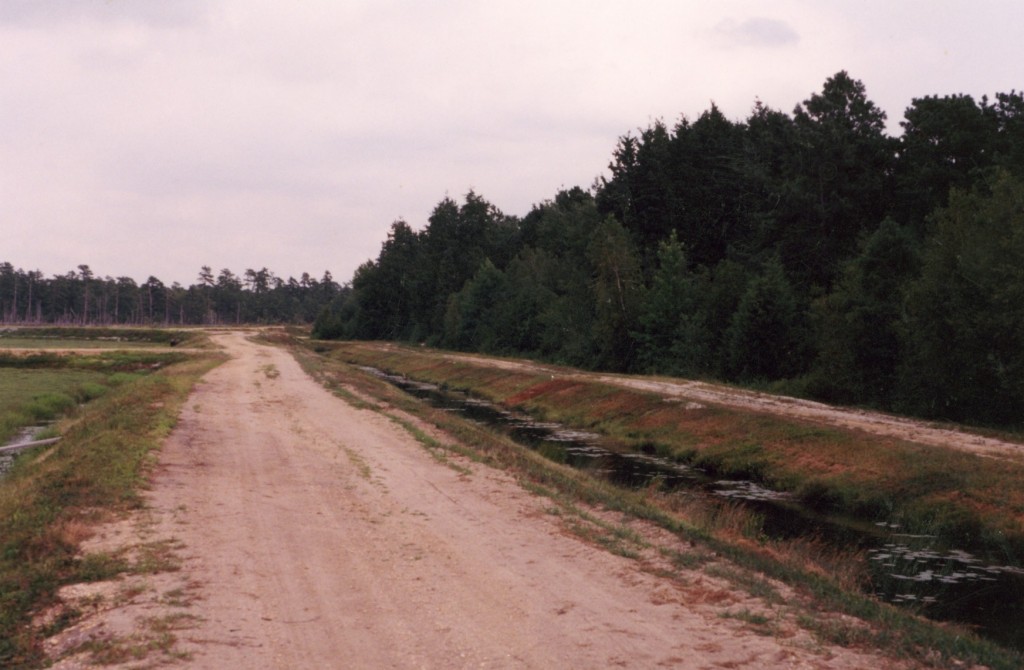 And so it began. Or almost ended quickly as I didn’t know much about Pine Barrens dirt roads, and what I thought was the beginning of a dirt road into the woods was actually a road on top of a causeway surrounding one of Stephen Lee’s cranberry bogs. Realizing my mistake – and being terrified at the thought of my Mercury’s nose diving down the sharp embankment into the bog – I cautiously turned around and headed back towards pavement.

I found the correct turn and within a few minutes the forest had completely swallowed my car. I rolled down my windows and breathed in the pine air for the first time. I turned off the radio and basked in the muted sounds of the woods, the only sound coming from the sand that passed under the tires of my car. I marveled in the beauty of the dark green canopy and the contrast of the white sandy road under me. The world stood still, and in my mind I could see teams carting pig iron to furnaces, colliers wagons loaded with charcoal, and stagecoaches bringing people to the shore.

Of course, I was worried about becoming stuck. I had read on the internet about how these trails through the woods had puddles so deep that they would swallow trucks whole. I wondered what I would do if I got stuck on this road which was turning sandier and sandier. I tried my hardest to suppress my panic when I heard the bottom of the car scrape along the road as the wheels got lower and lower into the ruts worn in by people who had the sense to explore in their trucks. 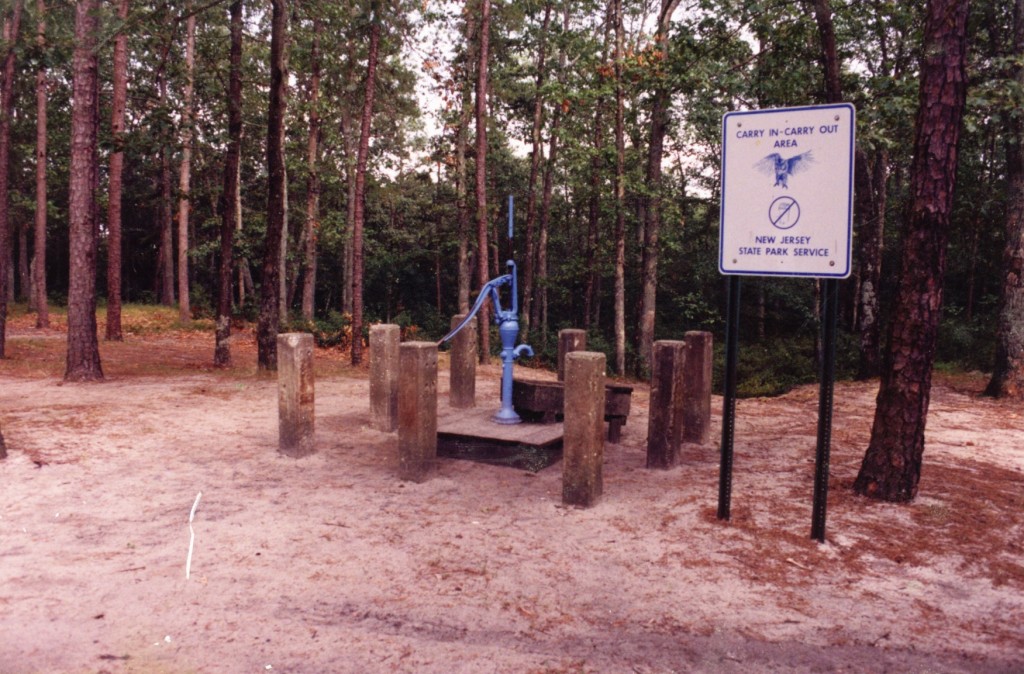 The road wound on curving gently through the woods. All of a sudden, to the right, a clearing appeared, and there seemed to be an old-fashioned water pump. This was, as I learned later, Godfrey Bridge campsite. To me at the time, though, it was a place so primitive that you had to pump your own water by hand!

I’m not quite sure if I was following the map correctly, or if I was navigating by sheer luck. Had I continued straight, I would have eventually passed the ruins at Washington, and ended up at Batsto. Or, had I made the wrong turn at Washington, I would have passed through the ghost town of Mount with only it’s forlorn orchard to speak of better times. The sand roads of the Pine Barrens can be confusing to those armed with topographic maps and GPS. Most of the roads have a uniform width, and the forest on either side is generally expressionless and unremarkable. 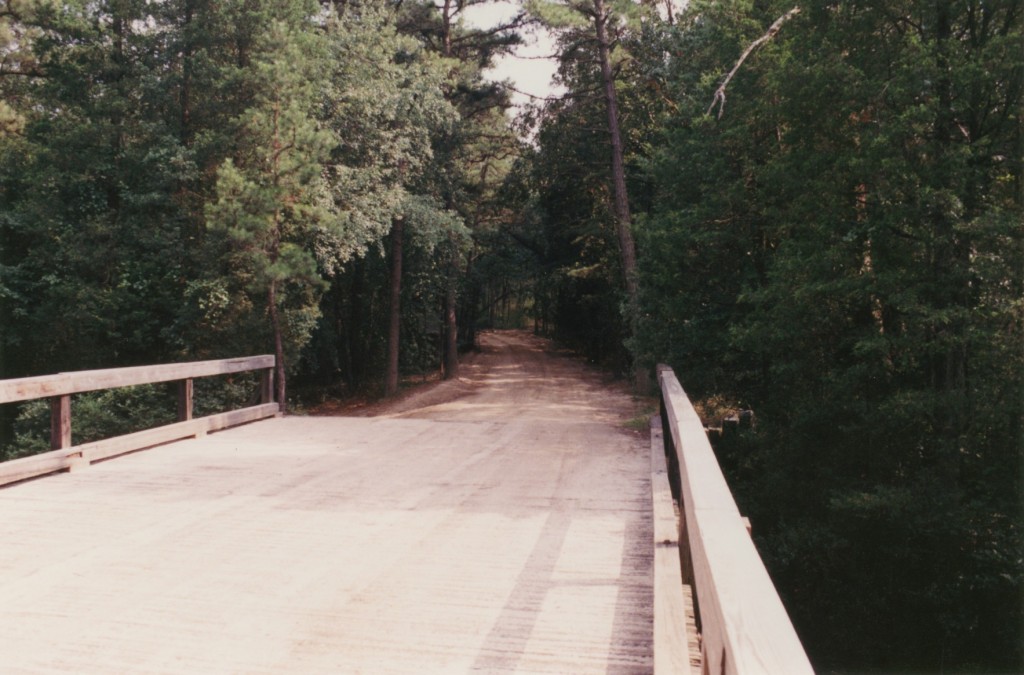 I did luck out, however, and picked the right path. My tires rolled on through the sugar sand and after what seemed like an eternity, my car passed over Hawkins Bridge, and I got my first good look at cedar water. Cedar water, a common sight in the Pine Barrens, actually has nothing to do with cedar at all. The myriad streams and waterways of the Pine Barrens pick up a peculiar reddish brown color as they flow through the forest. This color comes from the high iron content in the soil. It was this iron that powered furnaces such as Batsto, Atstion, and Hanover. 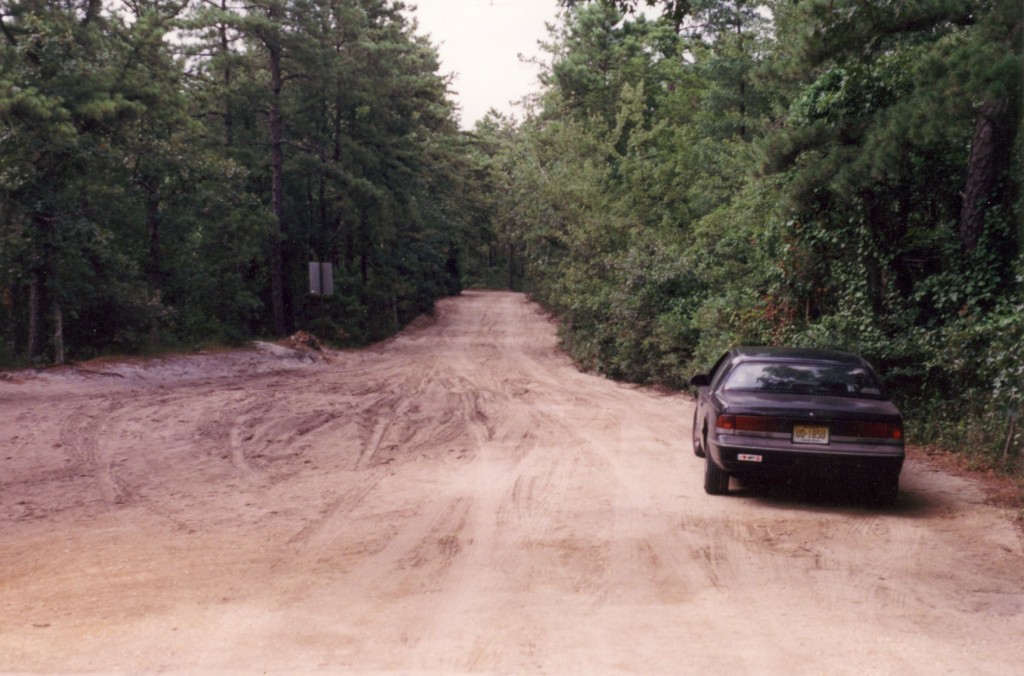 The road led on, cutting deep through the forest until it opened up into a large field. My cell phone, a brick compared to what I carry now, finally picked up one bar of service. My girlfriend used it to call her parents while I looked around. To my utter astonishment I saw a cellar hole! All these years of reading about cellar holes in my Henry Charlton Beck books, and here I was, discovering my own! Later I would learn that I was at Friendship, and the large building that I thought “had to be” a church or tavern was in fact the sorting house for the cranberry operation that operated in the bogs nearby. The town which “had to be” abandoned in the 1800’s was actually abandoned in the 1970’s. At that time, though, the only thing that mattered was that I had found my first ghost town in the Pine Barrens! How could it be that in such a state as New Jersey – one of the most densely populated states in the Union – that there could be such a ghost town? The days would come when I would visit more, becoming intimately familiar with the stories of each, and the people that called them home. 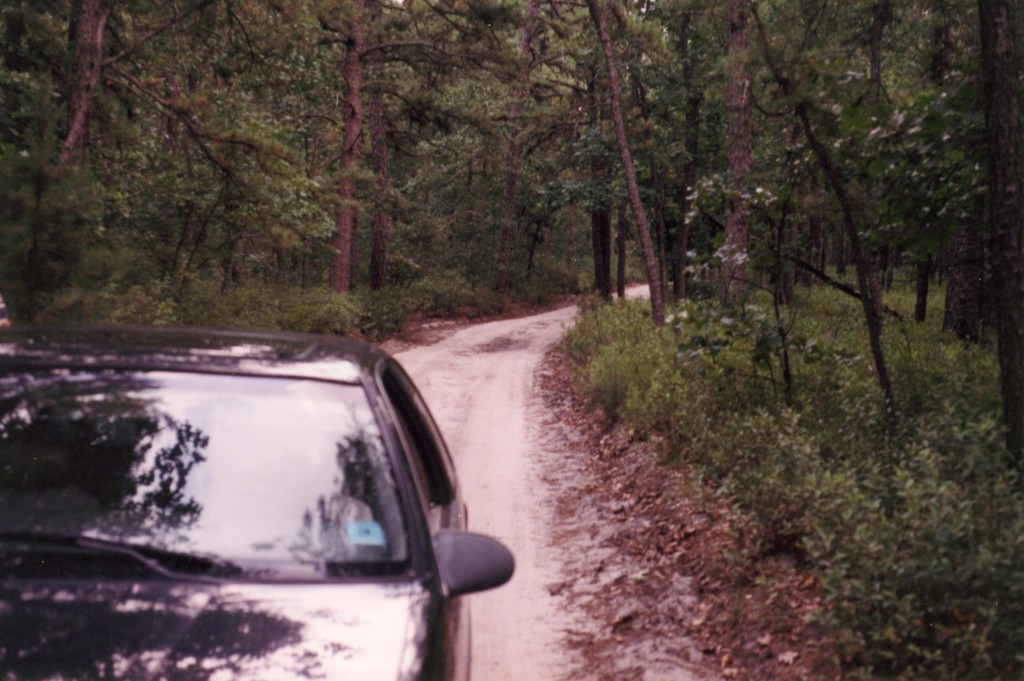 What of the Carranza Memorial? In all of the excitement of driving through the woods and almost getting stuck with my Mercury and finding my first ghost town, I had almost forgotten. With the day rapidly coming to an end, and a long drive back to Monmouth County, we stopped by briefly for few quick photographs. A quick stop at Nixons in Tabernacle, then on towards home. As the noise of sand slipping under my tires gave way to the monotonous drone of rubber on asphalt I knew that I would be back to explore the secrets of the Pine Barrens in ever more detail. 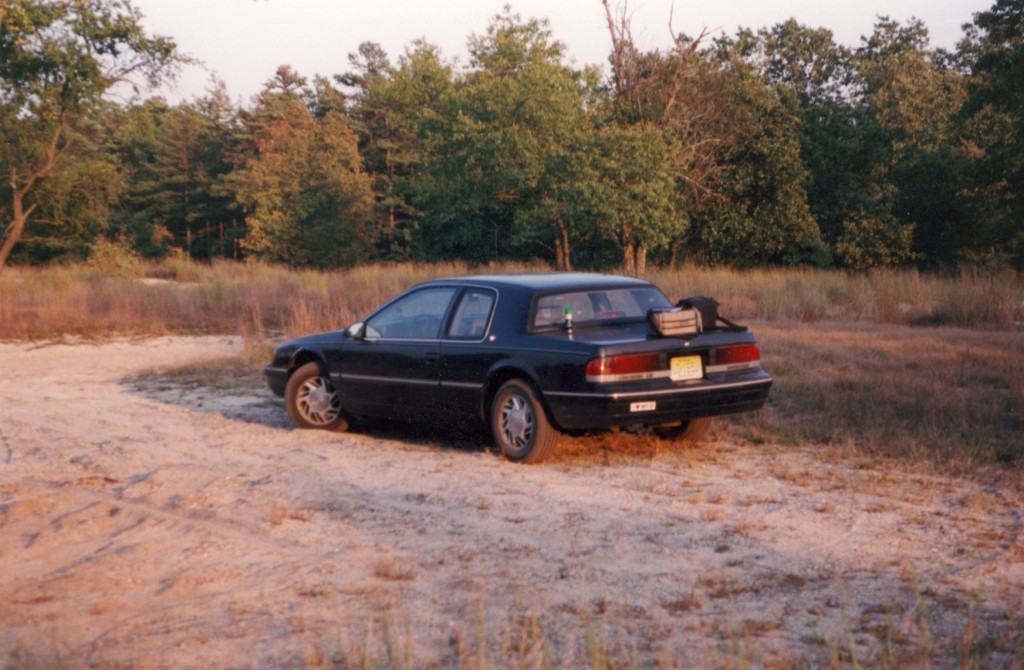