I set out yesterday to explore the Southern part of the canal through the pines, running from Mount Misery Brook to Bisphams Mill Creek. The day was heavy and ominous, the beginnings of the first Nor’easter of the Winter of 07-08 could be felt. Wisely, I stopped off and picked up a new pair of gloves and scarf.

The best way to explore the Southern part of the canal is to park near the bridge at Lower Mill. Garbage is strewn through the area – it’s remoteness lends itself well to being a dumping ground. A pile of computer monitors, old appliances, and vinyl siding litter the area. Recent rains have turned the road to muck, although fortunately the puddles are not deep.

I crossed the bridge and headed towards the spot where I wanted to park. The little clearing off to the side of the road had already been claimed by two vehicles – hunters, no doubt – so I decided to turn around and try exploring the Northern part of the canal.

Readers of the first part of this article will remember that the canal rises up from the remains of the trestle over Mount Misery Brook and continues on until it reaches a farm field. There the canal seems to angle along the side of the property, and presumably crosses Junction Road. I backtracked out to Four Mile Road, and drove on into New Lisbon.

New Lisbon, once known only as Lisbon, was named by the Portuguese who came to cut lumber in the area. In 1834 Gordon mentions that the town contained a grist mill, saw mill, store, and ten to twelve dwellings. He also notes that a “railroad or Macadamized road, is about to be built from this village to the mouth of Craft’s Creek, upon the Delaware, about 15 miles, in order to bring to market a quantity of excellent pine wood, which grows in the vacinity.” This railroad would later be known as the Kinkora Railroad, now long abandoned. Interestingly, Gordon does not mention the iron furnace that was here, built around 1800, just thirty-four years before he published his Gazetteer. Boyer mentions that cinders and slag mark the location of the furnace, but sadly today even those are gone.

I continued on up Junction Road, making a right turn at the diminutive New Lisbon Post Office. I followed the road up and down several times, becoming frustrated at the traffic backing up behind me as I slowed to take a look at spots that might be the canal. Unfortunately Brendan Byrne State Forest does not extend to this area, so any exploring must be done with the permission of the land owner. A lack of a shoulder to pull the Jeep on and no desire to trespass kept me from exploring this area further.

I swung back down Greenwood Bridge Road, past some small bogs and a blueberry patch, and then back onto State Land. I held a faint hope that the hunters who were in “my” parking spot were gone. Sadly, they were not, but I continued on down the road until I found a safe place to park the Jeep. I walked back through the woods to Mount Misery Brook. From there I was able to pick up the canal again, and explore the trestle on the other side of the river bank.

As the canal moved away from the brook, there’s a substantial incline. Imagine the letter V stretched out, so that each top point in the letter was not at such an extreme angle. That’s a rough example of the topography of the canal over Mount Misery Brook. The brook is in the low part of the V, and there is an incline on either side. This region of the canal is likely what made Beck conclude that this canal failed because water couldn’t flow uphill. 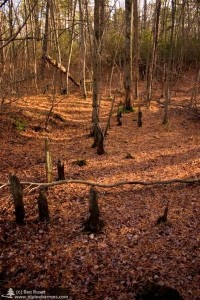 The canal pushed South, and almost immediately got lost in a tangle of briers. Following the canal was difficult – I would either have to hop down into the canal – now long dry – and then up the other side or leave the canal entirely to navigate around some obstacle. Throughout the length of the Southern part of the canal, Enduro trails usually follow it, making most of the walking fairly easy. 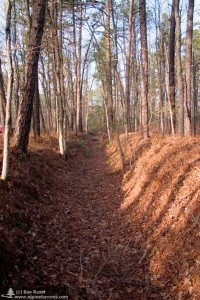 Winding through the woods, it’s hard to imagine how this canal worked. Early in my exploring the canal did a rather tight ninety degree bend. In other spots, it runs straight. Still others it curves gently. I couldn’t help but compare this to the canal at Harrisville. While that canal is much shorter, it’s also much deeper. This canal is – at most – four or five feet deep, but the length of it makes it an engineering marvel. 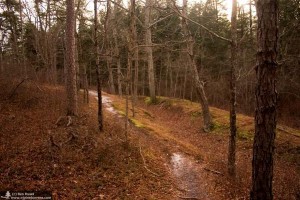 It appears to me that the canal followed the shore of what used to be the lake that was created by damming Bisphams Mill Creek, used to power the sawmill at Lower Mill. The canal has steep banks on either side, and then along one side a drop off into a cedar swamp, which according to old maps was once the lake. It doesn’t make sense, however, to dig a canal along the banks of a lake, unless for some reason the builder wanted to take water from before the dam.

The canal isn’t really hidden, either. Throughout it’s run South of Mount Misery Brook, trails follow or crisscross it. At one point it runs past a dumping ground for old glass bottles that I named the “Bottlegrounds.” At some point recently a surveyor came and shot a line through the forest, as magenta surveyors “ribbons” are tied to the branches of trees in some spots. 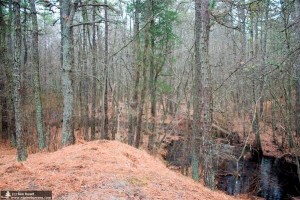 The canal dipped down, and the sound of rushing water became more noticible. I emerged from the cedar swamp at Bisphams Mill Creek, flowing pretty rapidly. The sound of the water came from it flowing around several trees that fell into the water. In the 1930’s, when Beck visited, he found the lake still in existance, with a waterfall nearby, and an “old footprint or two to betray humanity.” Today the canal merely peters out, the cinders of an old campfire on a hill overlooking the stream serve as testament that few people venture here. 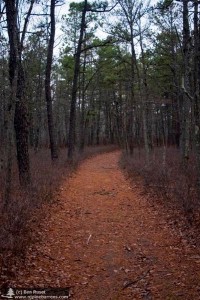 Taking the same “old wagon track” that Beck took over seventy years ago, I couldn’t help but reflect on how much hasn’t changed. Yes, the lake that Beck saw was gone, but the canal itself appeared much as it did in his time. The wonder and mystery of the canal, as well as the unanswered questions it raises remain.