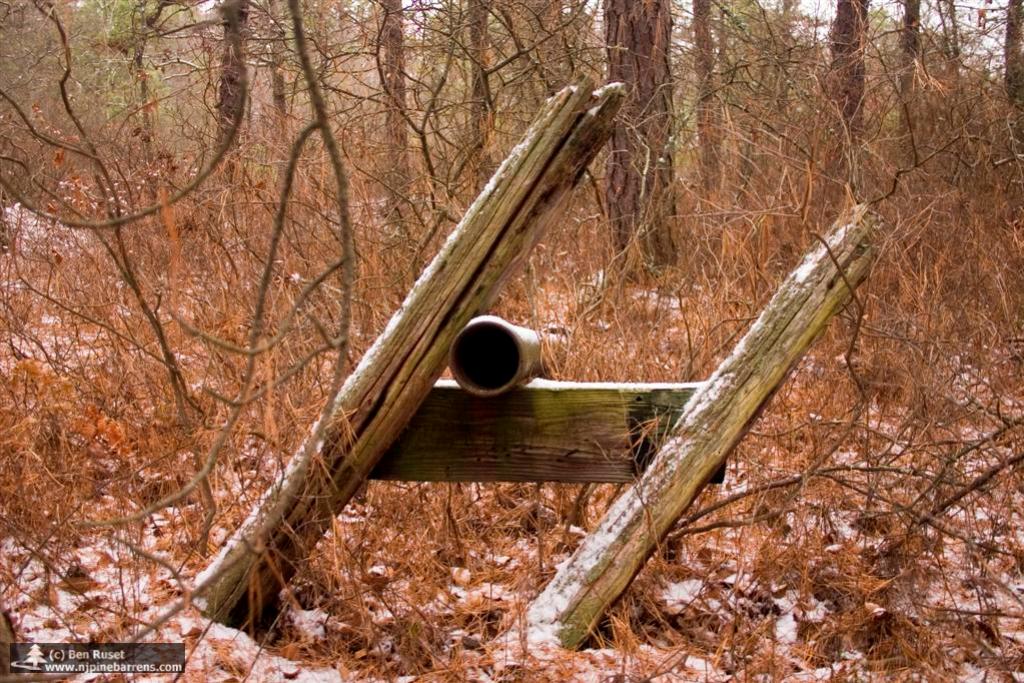 Thumbing through the chapter “Lost in the Woods: One Railroad” in More Forgotten Towns a few years back, I became intrigued with Beck’s discovery of a trestle and canal deep in the woods near New Lisbon on the fringes of Brendan Byrne State Forest. He stumbled upon it while looking for the remains of the Kinkora Railroad, located up by Fenwick Manor, now the headquarters of the New Jersey Pinelands Commission.

During his exploration he found the canal itself, and even more surprisingly, what appeared to be a wooden trestle back off the road. He had followed the canal for a few miles, and found that it fed into a lake or reservoir. Journeying back to his car, he came across several cranberry workerks who told him that the works were dug for Henry Black, who owned some cranberry bogs near Lower Mill. They claimed, apparently, that the venture had failed because nobody realized that water would not flow uphill.

All the way back in 2003 I had started to feel the urge to find the canal. It’s always eluded me. Following the directions that Beck left, I searched closer to Mary Ann Forge, thinking that what appeared to be a canal flowing near the Mount Misery Brook was what I was searching for. This “canal” however, disappears after a short walk into the woods. Frustrated, I kept searching. 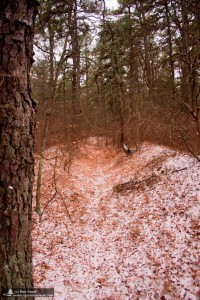 While I was following dead ends in the wrong part of the woods, Jeff Larsen, one of the members of the NJPineBarrens.com community, came upon the canal while he was exploring near Lower Mill. We visited the spot quickly last Saturday, and I returned the following day to better photograph the canal.

The day started out with a light dusting of snow, and the weather forecast called for occasional snow showers to be followed on by freezing rain and, eventually, rain. Driving down Rt. 70, I felt as if I was racing against time to get back to the canal before the weather turned unfriendly. I was also at a disadvantage – I had no GPS coordinates for the canal. I had a general idea where to look, but I did remember as Jeff and I were walking back to our vehicles during my first visit that the woods there are very disorienting. 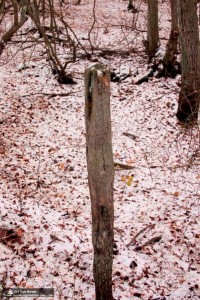 I started off into the woods, looking for the Northern White Pines that may have been planted by CCC camps in the area. After about 10 minutes of walking, I came across the canal. The canal, by now long free of any water, cut into the forest floor a good 4-5 feet. Natured had been slow in reclaiming the canal – for the most part it was clear of briers and other growth. Only the occasional tree here and there dared grow in it. Continuing onwards, following the slope down towards Mount Misery Brook, I came upon an oddity. It appeared to be the trunk of a dead tree standing straight up out of the canal. Then, a few feet away, the much less prominent remains of another one. What had appeared to be a tree was actually the posts of what may have been the “trestle” that Beck found. Every eight feet or so, you would either see one, or be able to feel with your foot where one had been. This trestle led down, and straight over the Mount Misery Brook, and continued onward. 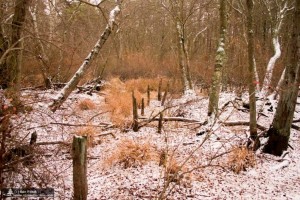 By the time I had made it to the waters edge the weather was starting to turn fowl. I turned around and followed the canal back past where I had found it. The canal rose out of the floodplain, and past through really beautiful pine forest. During my walk, I wracked my mind wondering if this really was a canal, and if it was, why they would think it would work. Perhaps it was for drainage into the Mount Misery Brook? As I followed the canal I saw where someone had dug smaller canals on either side of it. It was definitely getting weirder.

As I followed the canal, the forest began to get slightly less dense, and the canal more overgrown. Finally, I could see houses nearby, and an iron drainage pipe near the southern part of some farm fields. The canal seemed to continue on along the side of one of those fields, right through private property. With the sky threatening to open up at any minute, I followed the canal back and then bushwhacked through the woods to my Jeep. 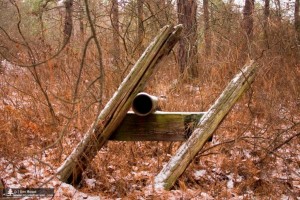 You can view more photos of the canal in the image gallery.